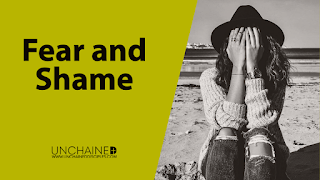 Dealing with shame and the fear of death.

We are born with only two fears

What do you think they are?

-- CNN.com (What is the science behind fear?)

3But I am afraid that, as the serpent deceived Eve by his craftiness, your minds will be led astray from the simplicity and purity of devotion to Christ.

Today we will look at fear and shame.

Wholeness is about being _______ healthy

Their Eyes Were Opened

Can’t cover everything about Adam and Eve

1Now the serpent was more crafty [aruwm] than any beast of the field which the LORD God had made. And he said to the woman, “Indeed, has God said, ‘You shall not eat from any tree of the garden’?” 2The woman said to the serpent, “From the fruit of the trees of the garden we may eat; 3but from the fruit of the tree which is in the middle of the garden, God has said, ‘You shall not eat from it or touch it, or you will die.’” 4The serpent said to the woman, “You surely will not die! 5“For God knows that in the day you eat from it your eyes will be opened, and you will be like God, knowing good and evil.” 6 When the woman saw that the tree was good for food, and that it was a delight to the eyes, and that the tree was desirable to make one wise, she took from its fruit and ate; and she gave also to her husband with her, and he ate. 7 Then the eyes of both of them were opened, and they knew that they were naked [eyrom]; and they sewed fig leaves together and made themselves loin coverings.

Delight to the eyes

Desirable to make one wise

The serpent was the only conscious (arun) creature around

eyrom = nothing is hidden at all

Who Will You Listen To?

Did Adam and Eve understand the difference between bad and good before they ate the fruit?

Every day we have to choose who we listen to

Their Eyes Were Opened

What does it mean that Adam and Eve’s eyes were opened?

Once they ate from the fruit the conscious became aware of something that it was never supposed to be aware of.

They became self conscience

Now they became overly concerned about what was wrong with themselves

Who has ever been concerned with what other people think about you?

What are things people will do when they are self conscious?

Your thoughts will be in alignment with your actions

They hid because they were naked

The opposite of pride is not humility

What is the opposite of pride?

The standard for success:

Pride and shame have the same standard.

Guilt is the objective reality of being liable to punishment because of something we’ve done.

Shame is the subjective feeling of being worthless because of who we are.

Guilt can be good

Feeling guilt when we sin is a good and godly and healthy response.

Example: guilt when cheating on your relationship

Those in shame have a tendency to hide; to create walls of protection behind which they hope no one will see the true you. They are terrified that their true self will be seen and known and rejected by others. So they put on a false face, they adopt a personality or certain traits that they think others will find acceptable. They are convinced that if someone were to see them for who they really are, they’d be repulsed and disappointed. So they are led to be less than their true self. They deliberately stifle whatever strengths they have. They say to themselves: “Whatever I do, don’t want to be vulnerable. It’s dangerous.”

Ideal you / Bad you

How do people respond to shame?

The ideal you is the you that is behaving and performing.

Our response to shame is often to run

Some people will run from God

Shame is a gateway emotion

Something Must be Wrong With Me

In every situation a child would believe these events and circumstances were telling a story about him/her. He believed there was something about him that caused these things to happen.

there must be something wrong with me because…

What messages that were communicated by your family seem to imply that you weren’t OK just as you were?

10He said, “I heard the sound of You in the garden, and I was afraid because I was naked; so I hid myself.”

Adam and Eve became vulnerable to:

All animals now have a fear of death

What are some things people do because they’re afraid of death?

The ancient Christians were fearless in the face of death

4Therefore we have been buried with Him through baptism into death, so that as Christ was raised from the dead through the glory of the Father, so we too might walk in newness of life. 5For if we have become united with Him in the likeness of His death, certainly we shall also be in the likeness of His resurrection, 6knowing this, that our old self was crucified with Him, in order that our body of sin might be done away with, so that we would no longer be slaves to sin; 7for he who has died is freed from sin.

8Now if we have died with Christ, we believe that we shall also live with Him, 9knowing that Christ, having been raised from the dead, is never to die again; death no longer is master over Him.

Jesus is the Answer

Adam and Eve were made in the image of God

Man’s fall brought with it

The enemy uses these tools against us

Once they became conscious They realized they were vulnerable.

Adam was innocent so he could fulfill whatever desire he had immediately.

There was no need to fight others over resources because God would provide.

Jesus Came With the Solution

That is the state Jesus tells us we need to go back to.

We lose these concerns:

We don’t have to be afraid anymore

Your value and identity are not determined by what others have said to you, about you, or perpetrated against you.

You are...who God says you are

We need to accept God’s

Secrets of Adam and eve

How the Holy Spirit Delivers You From Shame

The Naked Serpent - He Walks With Us

Do not anxiously look about you, for I am your God.

I will strengthen you, surely I will help you,

Surely I will uphold you with My righteous right hand.’

14The LORD God said to the serpent,

“Because you have done this,

Cursed are you more than all cattle,

And more than every beast of the field;

On your belly you will go,

And dust you will eat

All the days of your life;

15And I will put enmity

Between you and the woman,

And between your seed and her seed;

He shall bruise you on the head,

And you shall bruise him on the heel.”

“I will greatly multiply

Your pain in childbirth,

In pain you will bring forth children;

Yet your desire will be for your husband,

And he will rule over you.”

17Then to Adam He said, “Because you have listened to the voice of your wife, and have eaten from the tree about which I commanded you, saying, ‘You shall not eat from it’;

Cursed is the ground because of you;

In toil you will eat of it

All the days of your life.

18“Both thorns and thistles it shall grow for you;

And you will eat the plants of the field;

19By the sweat of your face

You will eat bread,

Till you return to the ground,

Because from it you were taken;

For you are dust,

And to dust you shall return.”

20Now the man called his wife’s name Eve, because she was the mother of all the living. 21The LORD God made garments of skin for Adam and his wife, and clothed them.

22Then the LORD God said, “Behold, the man has become like one of Us, knowing good and evil; and now, he might stretch out his hand, and take also from the tree of life, and eat, and live forever”— 23therefore the LORD God sent him out from the garden of Eden, to cultivate the ground from which he was taken. 24So He drove the man out; and at the east of the garden of Eden He stationed the cherubim and the flaming sword which turned every direction to guard the way to the tree of life.

We Choose the Punishment

Posted by Unchained Disciples at 11:20 PM