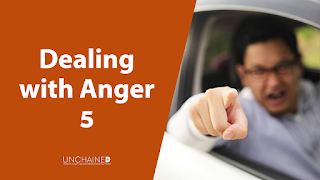 A look at the scenarios that make us prone to anger

As Christians, we often understand what the bible says about how we should be living our lives…but we don’t know how to do it

Learning not just what the word tells us to do, but learn how to do it

26BE ANGRY, AND YET DO NOT SIN; do not let the sun go down on your anger, 27and do not give the devil [t]an opportunity.

Not so much why we’re angry

Your Anger Teaches You About Yourself

Next time you’re angry, ask yourself…

Was is a threat to your:

If we build our happiness on things

A threat to that will make us angry

What is it that you value so much that a threat to it makes you angry?

Anger Can Help You Identify Your Emotions

Anger is a secondary emotions

Example: Honked at when the light  turned green

Anger Can Point Out Your Insecurities

Anger is often the evidence of insecurity in my life

If you learn why you were angry, You will learn about yourself

Anger Reveals Your Potential for Evil

Your unconscious mind is composed of repressed ideas, weaknesses, desires, instincts, and shortcomings.

We attempt to adapt to religious beliefs, cultural norms and societal expectations.

What impulsive aggression flashed through your mind?

There are three common categories by which we express anger

You might be an exploder at home, but a stuffer at work

Solution: Tell the Truth in Love

15 Instead, speaking the truth in love, we will grow to become in every respect the mature body of him who is the head, that is, Christ.

Have compassion for the other person

Tell the truth about what’s bothering you

Why We Get Angry

29 One who is slow to anger has great understanding; But one who is quick-tempered exalts foolishness.

The LORD is compassionate and gracious, Slow to anger and abounding in mercy.

What makes some people quick to anger?

Understanding why you’re angry can help you manage your anger

Fathers, do not provoke your children to anger, but bring them up in the discipline and instruction of the Lord.

Most people learn how to express anger from their parents / family

Some have made a conscious decision to be different

10 Questions to Ask Yourself

Last Lesson: “Peace looks like boredom to those who grew up in chaos”

Who You Are Today Quote

when someone doesn’t respond to your text makes you feel

Can be caused by past trauma

You can be triggered by a

Something was an attack on my self-worth

Our bodily systems operate pretty much on their own.

There are numerous reasons for

Some of these are pleasurable (love!), and some not so much (bear!).

When we have these physiological sensations, our minds want to attach them to a story; there’s some kind of satisfaction in being able to “blame” a person or situation for our emotions. But our emotions are pretty much based on our thoughts about a situation, not anything someone else says or does.

“I must be angry because they did…”

Several years ago, I noticed that I’d become agitated (and feel angry) for no reason on some sunny spring days. The externals of my life were fine; in general, I felt serene and peaceful, and yet this irritability would surge inside me. Then I noticed a pattern: On each of these occasions, within 4-6 hours, the sky would cloud over, and it would rain. And I’d feel better almost immediately.

I wasn’t feeling “anger” or “irritability”—I was feeling a shift in adrenalin in my body, likely in response to weather systems I couldn’t see or measure. Today, most of the time, I can identify that it’s adrenalin and detach the physical response from any stories about situations in my life. And I remember to pack a rain jacket if I go out for a walk.

Example: walk into a meeting saying “here we go again“

can be caused by your environment

Example: feel irritated by some people

Cognitive distortions are faulty or inaccurate thinking, perceptions or beliefs.

Think about a time something happened and you thought it was one way, but it turned out to be wrong

Example: Kevin and the police

Minimization of the positive

Mental filter / Only seeing what you expect to see

What are all the facts?

Example: vaccine is the Mark of the Beast

Ask: How likely is it to happen?

anything that goes wrong is inherently your fault

Example: They died because of your sin

you feel completely out of control

Ask: What parts do you have control over?

People with bipolar disorder can get rage for no reason.

They may then  associate it with something that’s going on around them even though it has nothing to do with it.

People with bipolar or more likely to:

you get annoyed when others don’t do it

Something that you overcame yourself, you get angry when you see others doing it.

Christian’s get upset at the sins of others

Jealous because you can’t do it

41Why do you look at the speck in your brother’s eye, but fail to notice the beam in your own eye?

Talking About Things that Made You Angry

Always talking about things that made you angry

One of the biggest problems with our anger is that we talk about it so much.

Every time we retell the story we get more angry.

A fool always loses his temper, But a wise person holds it back.

If you’re angry all the time, ask yourself…

Self-awareness and self dialogue

Sometimes you may walk through the house and it doesn’t bother you. While other times it is the end of the world.

It doesn’t have as much to do with the external environment as what is going on inside of us.

Without some outlet, it will come out

Example: If a woman had an issue with her father they were often projected onto the pastor.

Sometimes quitting substances can be equally effective as medication

They can be addictive

What works for one person can be destructive with others

Check with your doctor first before taking any medication

Track the pattern of your mood changes

Observation and feedback from others

Make sure you don’t punish someone for giving you feedback

As long as you deny that it is there… It continues.  Whether you acknowledge it or not the poison keeps seeping through your body

I don’t have time to be angry

Take a time out

How to control your anger

How to handle anger part one

Lifespan of an emotion

is a behavioral disorder characterized by explosive outbursts of anger and/or violence, often to the point of rage, that are disproportionate to the situation at hand (e.g., impulsive shouting, screaming or excessive reprimanding triggered by relatively inconsequential events). Impulsive aggression is not premeditated, and is defined by a disproportionate reaction to any provocation, real or perceived.

Posted by Unchained Disciples at 11:35 PM