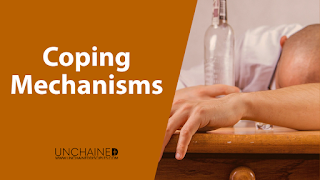 Behaviors, thoughts and emotions that we use to address the stresses and changes in life.
~~ Watch the Video ~~

Has anyone heard of ‘Malchus’?

21 I find then the principle that evil is present in me, the one who wants to do good.

22 For I joyfully concur with the law of God in the inner man,

23 but I see a different law in the members of my body, waging war against the law of my mind and making me a prisoner of the law of sin which is in my members.

24 Wretched man that I am! Who will set me free from the body of this death?

25 Thanks be to God through Jesus Christ our Lord! So then, on the one hand I myself with my mind am serving the law of God, but on the other, with my flesh the law of sin.

God is not only concerned with you going to Heaven and being righteous...He wants you to be whole.

12 Habits to Renew Your Mind

Stop Breaking Promises You Make to Yourself

This is often the core issue when people have trust issues

Fellowship With Other Believers

Healthy relationships serve as a buffer against stress

Quiet time is a regular individual session of Christian spiritual activities, such as prayer, private meditation, contemplation, worship of God or study of the Bible.

A regularly attended time that you spend privately with God

Sing a song that speaks to your situation

Pray the word back to God

90% of bodies serotonin is produced in the digestive tract

How People Cope With Stressful Situations

Coping strategies are the behaviors, thoughts, and emotions that you use to adjust to the changes in your life.

Requiring the use of coping skills to adapt.

What are some things you know about Peter?

What do we know about his character?

4Jesus therefore, knowing all the things that were coming upon Him, came out into the open and *said to them, “Whom are you seeking?” 5They answered Him, “Jesus the Nazarene.” He *said to them, “I am He.” And Judas also, who was betraying Him, was standing with them. 6Now then, when He said to them, “I am He,” they drew back and fell to the ground. 7He then asked them again, “Whom are you seeking?” And they said, “Jesus the Nazarene.” 8Jesus answered, “I told you that I am He; so if you are seeking Me, let these men go on their way.” 9This took place so that the word which He spoke would be fulfilled: “Of those whom You have given Me I lost not one.” 10Then Simon Peter, since he had a sword, drew it and struck the high priest’s slave, and cut off his right ear; and the slave’s name was Malchus. 11So Jesus said to Peter, “Put the sword into the sheath; the cup which the Father has given Me, am I not to drink it?”

What could have happened after Peter chopped off Malchus’ ear?

What motivated Peter to attack Malchus?

21From that time Jesus began to point out to His disciples that it was necessary for Him to go to Jerusalem and to suffer many things from the elders, chief priests, and scribes, and to be killed, and to be raised up on the third day. 22And yet Peter took Him aside and began to rebuke Him, saying, “God forbid it, Lord! This shall never happen to You!” 23But He turned and said to Peter, “Get behind Me, Satan! You are a stumbling block to Me; for you are not setting your mind on God’s purposes, but men’s.”

Peter was led by his emotions

Peter’s coping strategy was to fight

Jesus Instructions to Bring a Sword

34 And He said, “I say to you, Peter, the rooster will not crow today until you have denied three times that you know Me.”

35 And He said to them, “When I sent you out without money belt and bag and sandals, you did not lack anything, did you?” They said, “No, nothing.”

36 And He said to them, “But now, whoever has a money belt is to take it along, likewise also a bag, and whoever has no sword is to sell his coat and buy one.

37 “For I tell you that this which is written must be fulfilled in Me, ‘AND HE WAS NUMBERED WITH TRANSGRESSORS’; for that which refers to Me has its fulfillment.”

7 Biggest Misfits of the Bible

Peter got saved. Then he cut some guy's ear off. And then he said the F-word in Aramaic and denied Christ three times even when he was warned beforehand what would happen.

Peter was fishing naked when Jesus returned, and put his clothes back on before he jumped into the water to swim to shore. After that, I think he re-committed his life to the Lord and teamed up with Paul to do evangelism.

Then Peter and Paul got in a fight.

Jesus could have built his church on John... Or Luke. Mark or Matthew or even Paul. But he chose the most temperamental, undependable apostle of the bunch.

Peter was not a “go with the flow” type of guy

Some coping styles are more effective than others.

Example: throw a fit when you don’t get your way

These mechanisms are normal and everyone uses them to some degree.

Example: you’ll do this and you will like it

This fear forces their need for control, protection and achievement

Moving away from people

These are the typical loner types

4 Love is patient, love is kind, it is not jealous; love does not brag, it is not arrogant. 5 It does not act disgracefully, it does not seek its own benefit; it is not provoked, does not keep an account of a wrong suffered, 6 it does not rejoice in unrighteousness, but rejoices with the truth; 7 it keeps every confidence, it believes all things, hopes all things, endures all things.

Has anyone experienced this type of love?

Pain is a result of Brokenness

How do you guys deal with stressful or painful situations?

What are some ways people cope with stress, anxiety and hurt?

Active coping strategies involve an awareness of the stressor,

Avoidant coping is characterized by ignoring the issue,

69Now Peter was sitting outside in the courtyard, and a slave woman came to him and said, “You too were with Jesus the Galilean.” 70 But he denied it before them all, saying, “I do not know what you are talking about.” 71 When he had gone out to the gateway, another slave woman saw him and *said to those who were there, “This man was with Jesus of Nazareth.” 72And again he denied it, with an oath: “I do not know the man.” 73A little later the bystanders came up and said to Peter, “You really are one of them as well, since even the way you talk gives you away.” 74 Then he began to curse and swear, “I do not know the man!” And immediately a rooster crowed. 75And Peter remembered the statement that Jesus had made: “Before a rooster crows, you will deny Me three times.” And he went out and wept bitterly.

People who struggle with addictions often

What are some ways people cope with stress and anxiety?

People self medicate to ease the pain

Everyone has issues but it’s what you do about them that is dangerous.

We often want to address the coping mechanism without addressing the issue that it’s being used to cope with.

Accept that Jesus loves you as you are

It’s not about you trying to become a better version of you. It’s about a power greater changing you from the inside out.

Then that’s not repentance

That doesn’t come from will power

Repentance means you think about the sin differently

Our Hope Changes Us

2Beloved, now we are children of God, and it has not appeared as yet what we will be. We know that when He appears, we will be like Him, because we will see Him just as He is

3 And everyone who has this hope fixed on Him purifies himself, just as He is pure.

The key to really changing starts with your identity

Discipline and self-control are fruits of the spirit

How Do You Cope? | Semel Institute for Neuroscience and Human Behavior (ucla.edu)

The gateway is trauma

7 Biggest Misfits of the Bible

Posted by Unchained Disciples at 10:53 PM