How to Know God is Speaking - Part 2 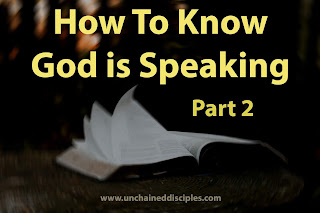 Those voices in your head that distract you from hearing God ... where do they come from?

Story: Husband with the hearing problem

2 Corinthians 10:3-5
3For though we walk in the flesh, we do not war according to the flesh, 4for the weapons of our warfare are not of the flesh, but divinely powerful for the destruction of fortresses. 5We are destroying speculations and every lofty thing raised up against the knowledge of God, and we are taking every thought captive to the obedience of Christ, 6and we are ready to punish all disobedience, whenever your obedience is complete.

The Source of Evil

Evil is whatever goes against God

There may be overlap between the sources

Example: Satan can put a thought in your mind

Deafened by Your Own Voice

The inner critic is that voice inside our heads that constantly says negative self statements.

The source of your shame

Renewed Mind will be in a future series

Voices in Your Mind

2 Corinthians 10:4
4for the weapons of our warfare are not of the flesh, but divinely powerful for the destruction of fortresses.

A pattern has to do with
The solution is to change our thought patterns.

Example: I’m tall
Example:  the Bible doesn’t apply to every area now because times have changed

Voice of Your Identity

There is a difference between identity and behavior.

The Voice of the World

The systems that promote non-Christian perspectives

The messages may be subtle

Example: you shouldn’t  do anything to offend anyone

Example: people are offended by the name of Jesus

Romans 7:18
18 For I know that nothing good dwells in me, that is, in my flesh; for the willing is present in me, but the doing of the good is not.

Psalms 37:4
Delight yourself in the LORD; And He will give you the desires of your heart.
In looking at “the flesh” we are looking at “wrong desires”
Some people teach that any desire that you have in your heart must be from God

Example: you have a desire to match your socks with you shirt

Example:  A desire to make your bed every morning

Examples of the “lust of the flesh” include the following:

Some of your desires come from lust of your flesh

What is the Lust of the Eyes?

The lust of the eyes is that temptation to look upon things we shouldn’t look upon, or to have things that we shouldn’t have. In other words, it is to cast our eyes upon something with desire or pleasure, even though God has told us not to look upon those things.

To covet means to have a yearning or a strong desire to have something that rightfully belongs to someone else.

“That’s not fair that he has such a beautiful wife. I want her as my wife,”
“I wish I had a job like him”
“I wish I could sing like that”
“I want the new iPhone”

What is the Pride of Life

The pride of life is that sinful temptation for excess greatness or power that we feel the temptation to attain.

Pride is one of the sins that God hates most.
Some examples of this sin include the following:

Looking at These Three Temptations in Action

Every sin we commit will involve at least one of these three temptations, but it may include all three

The Flesh vs the Spirit

The enemy can’t be successful without the voice of the flesh.

“It sounds like science fiction, but it seems that bacteria within us — which outnumber our own cells about 100-fold — may very well be affecting both our cravings and moods to get us to eat what they want, and often are driving us toward obesity”.
-- Study UCSF

Story: fat rats
if we take the bacteria out of someone who is obese and put it in a fit mouse the mouse will gain wait and get depression within 4 months

Bacteria are the source of
In our gut we have

Virus Can Control Your Sex Drive

Once inside, the virus shuts down the immune system and the cricket-equivalent of white blood cells, offering no outside signs that anything’s wrong.

It’s natural for animals, including us, to want to hunker down when we’re sick. Food and fun lose all appeal, but it’s not the sickness telling our bodies to be lame. It’s our immune system telling us to chill out and get some much-needed rest.

The brain does not originate thoughts it is just a processor.

You lose your appetite and sex appeal when you are sick is because your body shuts down sending signals from your stomach to the brain as it affects. It does this because it recognizes that foreign entities have taken over the internal ecosystem.

Bacteria and viruses are the cause of

Having bacteria in your stomach is natural and is part of our normal physical makeup.
the ion channels in the bacteria are the exact same as those in the nerves

The brain listens to bacteria

This is, I believe, the point of fasting.
Why did people fast in the bible?
This would explain why Jesus fasted.

Your Expectations of God

Your opinion of God can interfere with you hearing from God

What is it that you’re judging God by?
What measure do you use to determine if God exists?

What do you use to determine if God has blessed you?

What do you use to determine if God loves you?

What is it that makes you say “God doesn’t love me”?

How to Know If It's God
https://youtu.be/LxFuX1NKXrw

Is Bacteria the Secret Weapon to Weight Loss?
https://www.news4jax.com/health/2014/02/06/is-gut-bacteria-the-secret-weapon-to-weight-loss/

Gut Bacteria From Thin Humans Can Thin Mice Down
https://www.nytimes.com/2013/09/06/health/gut-bacteria-from-thin-humans-can-slim-mice-down.html

Email ThisBlogThis!Share to TwitterShare to FacebookShare to Pinterest
Labels: bacteria, desires, discerning God's voice, gut, hearing from God, how to know God is speaking, identity, lust of the eyes, lust of the flesh, pride of life, strongholds, the flesh, the world, Your Mind