The Parable of the Wheat and the Tares 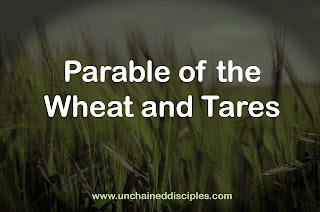 A study of the parable of the wheat and the tares.

What We've Learned About the Kingdom

What We Learn from the Parable of the Sower/Soils (Matthew 13: 1-23)
I claimed that inheriting the Kingdom of God means to live a life in complete obedience to the Holy Spirit

A parable is a short story that illustrates one or more instructive lessons or principles. A parable is a type of analogy.
Many of the parables explain how the enemy interacts with the Kingdom

Why Jesus Spoke in Parables

Jesus spoke in parables to:

Parable of the Tares

Jesus is talking to the same crowd as the parable of the soils.
Matthew 13:24-30
Jesus presented another parable to them, saying, "The kingdom of heaven may be compared to a man who sowed good seed in his field.
25 "But while his men were sleeping, his enemy came and sowed tares among the wheat, and went away.
26 "But when the  wheat sprouted and bore grain, then the tares became evident also.
27 "The slaves of the landowner came and said to him, 'Sir, did you not sow good seed in your field? How then does it have tares?'
28 "And he said to them, 'An enemy has done this!' The slaves said to him, 'Do you want us, then, to go and gather them up?'
29 "But he said, 'No; for while you are gathering up the tares, you may uproot the wheat with them.
30 'Allow both to grow together until the harvest; and in the time of the harvest I will say to the reapers, "First gather up the tares and bind them in bundles to burn them up; but gather the wheat into my barn."'"

Wheat is a grass widely cultivated for its seed, a cereal grain which is a worldwide staple food.   Wheat is grown on more land area than any other food crop, and it’s the second most produced cereal after corn.
Globally, it is the leading source of vegetal protein in human food.  In a small part of the general population, gluten – the major part of wheat protein – can trigger coeliac disease, noncoeliac gluten sensitivity, gluten ataxia, and dermatitis herpetiformis.

Darnel usually grows in the same production zones as wheat and was a serious weed of cultivation until modern sorting machinery enabled darnel seeds to be separated efficiently from seed wheat.  The similarity between these two plants is so great that in some regions, darnel is referred to as "false wheat". It bears a close resemblance to wheat until the ear appears. The wheat will also appear brown when ripe, whereas the darnel is black.

Darnel can be infected by an endophytic fungus.  Eating an infected plant could cause a drunken nausea, which can be fatal.
Once you isolate the wheat from the tares you then need to separate the chaff from the grain

What the Parable States

The farmer sowed the seeds
The farmer owns the field

The Explanation of the Parable

Matthew 13:36-43
36  Then He left the crowds and went into the house. And His disciples came to Him and said, "Explain to us the parable of the tares of the field."
37 And He said, "The one who sows the good seed is the Son of Man,
38 and the field is the world; and as for the good seed, these are the sons of the kingdom; and the tares are the sons of the evil one;
39 and the enemy who sowed them is the devil, and the harvest is the end of the age; and the reapers are angels.
40 "So just as the tares are gathered up and burned with fire, so shall it be at the end of the age.
41 "The Son of Man will send forth His angels, and they will gather out of His kingdom all stumbling blocks, and those who commit lawlessness,
42 and will throw them into the furnace of fire; in that place there will be weeping and gnashing of teeth.
43 "Then THE RIGHTEOUS WILL SHINE FORTH AS THE SUN in the kingdom of their Father. He who has ears, let him hear.

The Son of Man

Jesus is both the sower and the owner of the field
The term son of man:
Jesus has planted something new in the world.

Opposition has been put into place opposing Jesus.

Why does evil exists in the world?
Satan is not bound
Jesus explains that the evil in the world is not just a result of people making evil choices.
The enemy didn't alter the wheat in this example
What Satan introduced looks like what Jesus planted
We learn:

Who Are the Servants?

The End of the Age

There is a day of separation that is going to come
Revelation 14:12-20
12 Here is the perseverance of the saints who keep the commandments of God and their faith in Jesus.
13 And I heard a voice from heaven, saying, "Write, 'Blessed are the dead who die in the Lord from now on!'" "Yes," says the Spirit, "so that they may rest from their labors, for their deeds follow with them."
14 Then I looked, and behold, a white cloud, and sitting on the cloud was one like a son of man, having a golden crown on His head and a sharp sickle in His hand.
15 And another angel came out of the temple, crying out with a loud voice to Him who sat on the cloud, "Put in your sickle and reap, for the hour to reap has come, because the harvest of the earth is ripe."
16 Then He who sat on the cloud swung His sickle over the earth, and the earth was reaped.
17  And another angel came out of the temple which is in heaven, and he also had a sharp sickle.
18 Then another angel, the one who has power over fire, came out from the altar; and he called with a loud voice to him who had the sharp sickle, saying, "Put in your sharp sickle and gather the clusters from the vine of the earth, because her grapes are ripe."
19 So the angel swung his sickle to the earth and gathered the clusters from the vine of the earth, and threw them into the great wine press of the wrath of God.
20 And the wine press was trodden outside the city, and blood came out from the wine press, up to the horses' bridles, for a distance of two hundred miles.

When reading this many peoples mind goes directly to the question "is this fair quote”?

In parable of the sower, the seed is the word and the soil is human hearts
The field is the whole world
It's not just the church
Christ is sowing seeds in this world.

We will study who is wheat vs tare in the next lesson
Can you be a wheat one day and a tare the next?
Are the wheat all Christians?
Are the tares Christians?
Remember Kingdom of God means reign of God
The only distinction we get between wheat and tares is based on who planted them
Summary:

Citizens of the Kingdom are children of God.
Did Jesus (or God) refer to any people as “children of Satan” elsewhere in scripture?

The parable deals with one truth: Jesus plants true children of the Kingdom and the devil plants a counterfeit
How can you distinguish the wheat from the tares?
We  aren’t the reapers and we aren't  the servants
You are a child of the Kingdom
A plant doesn't produce fruit to consume it  for itself
The purpose of the fruit is to attract others to aid in your purpose
You need to put aside your selfish goals and ask what the Father what will He have you do for the Kingdom
John 12:24-26
24“Truly, truly, I say to you, unless a grain of wheat falls into the earth and dies, it remains alone; but if it dies, it bears much fruit. 25“He who loves his life loses it, and he who hates his life in this world will keep it to life eternal. 26“If anyone serves Me, he must follow Me; and where I am, there My servant will be also; if anyone serves Me, the Father will honor him.
… Let’s Serve Jesus

Wheat and Tares Pt 1
Chaplain Bob Walker - The Light of the World Ministry
Parable of the wheat and tears by Bible talk.tv
The Wheat and Tares Parable 1- Warren Wiersbe
2. Already, Not Yet [Parables of the Kingdom] Tim Mackie (The Bible Project)
https://youtu.be/gdYMEl_h-lE

Don’t get distracted with removing the weeds
We’ve got to be concerned about the whole world
There are more people being saved every hour in the third world than were save at Pentacost when Peter preached
“Be still and know that I am God” means “take your hands off”
Get the long view
Matthew 13:51-52
51“Have you understood all these things?” They said to Him, “Yes.” 52And Jesus said to them, “Therefore every scribe who has become a disciple of the kingdom of heaven is like a head of a household, who brings out of his treasure things new and old.”
You marked your bible, but did your bible mark you?
He said to share both what is old and what is new

Jesus’ parables explain the nature of the spiritual kingdom
Posted by Unchained Disciples at 6:39 AM