What Is The Kingdom of God? 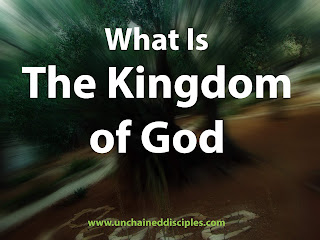 A biblical study to determine what the Kingdom of God actually is.  Is it a future Heaven?  Is it here now?

Doctrine: a principle or position held related to the Christian faith

Theology: the study of God and of God's relation to the world

The Oxford English Dictionary defines eschatology as "the part of theology concerned with death, judgment, and the final destiny of the soul and of humankind". It is a doctrine about the end times.

Already But Not Fully Accessible (Mine)

Kingdom of God vs Kingdom of Heaven (Dispensationalist Variant)

We will analyze this view, but note that I disagree with it...

Matthew 11:11
"Truly I say to you, among those born of women there has not arisen anyone greater than John the Baptist! Yet the one who is least in the kingdom of heaven is greater than he.

Luke 7:28
28 "I say to you, among those born of women there is no one greater than John; yet he who is least in the kingdom of God is greater than he."
Matthew and Luke are referencing the same statement of Jesus but using two different terms
After Parable of Seeds and The Different Soils

Matthew 13:10-11
10 And the disciples came and said to Him, "Why do You speak to them in parables?" 11 Jesus answered them, "To you it has been granted to know the mysteries of the kingdom of heaven, but to them it has not been granted.

Mark 4:10-11
As soon as He was alone, His followers, along with the twelve, began asking Him about the parables. 11 And He was saying to them, "To you has been given the mystery of the kingdom of God, but those who are outside get everything in parables,

Jewish Understanding of the Kingdom of God

Since the Kingdom of God is a Jewish term we can examine what it meant historically.
Malkuta de-Adonai (Kingdom of God)
Reign or sovereignty of God as contrasted with the kingdom of the worldly powers. The hope that God will be King over all the earth, when all idolatry will be banished.
--JewishEncyclopedia.com

The Jews Were Expecting the Kingdom to Come

The Old Testament looks forward to the coming of the Kingdom of God as a time when God will rule the earth.

Jeremiah 23:5
5“Behold, the days are coming,” declares the LORD,
“When I will raise up for David a righteous Branch;
And He will reign as king and act wisely
And do justice and righteousness in the land.

While the Jews were being oppressed by Rome they prayed for "the Kingdom of Heaven," to come speedily.

Today the most important Jewish prayers is known as the Shema Israel.
The Shema is recited aloud as follows:

Shema Yisrael Adonai Eloheinu Adonai Echad =
Hear, O Israel: the LORD is our God, the LORD is One

Blessed be God’s Name and glorious kingdom forever and ever. You shall love the Lord your God with all your heart, with all your soul, and with all your might. And these words, which I [God] teach you this day, shall be upon your heart. You shall teach them diligently to your children, speak of them when you sit in your house, when you walk by the way, when you lie down and when you rise up. And you shall bind them as a sign upon your hand, and they shall be for a reminder before your eyes. And you shall write them on the doorposts of your house and upon your gates.

So the expectation of the Kingdom of God was central to the Jews.

They thought a Messiah was going to come and lead a battle to take over Rome by force
They viewed the Kingdom of Heaven in opposition to the Kingdom of Rome
Most Jewish sources see the Kingdom as a restoration of Israel including either:

The Jewish View of the Kingdom Included Everyone Following the Law

Kingdom of God is Synonymous With Kingdom of Heaven

Jews held the name of God to be so Holy that they were not allowed to speak it or write it.
Exodus 20:7 says "You shall not misuse the name of the Lord your God" so pious Jews used various replacements for the sacred name of God (YHWH) in order to avoid the danger of breaking this commandment. One of these was the term "heaven."
The name of God (YHWH) was replaced with Adonai (Lord) or Heaven
"'Ol Malkut Shamayim" [Kingdom of Heaven]; "Heaven" is a synonym of "God"
--JewishEncyclopedia.com

The Kingdom is Spiritual

God had not revealed the details of His plan to bring man back into fellowship with Him.

Luke 17:20-21
20Now having been questioned by the Pharisees as to when the kingdom of God was coming, He answered them and said, “The kingdom of God is not coming with signs to be observed; 21nor will they say, ‘Look, here it is!’ or, ‘There it is!’ For behold, the kingdom of God is in your midst[within you].”
John 18:36
36Jesus answered, “My kingdom is not of this world. If My kingdom were of this world, then My servants would be fighting so that I would not be handed over to the Jews; but as it is, My kingdom is not of this realm.”

The Kingdom and Judgment Day

Matthew 7:15;21-23
15“Beware of the false prophets, who come to you in sheep’s clothing, but inwardly are ravenous wolves.
...
21“Not everyone who says to Me, ‘Lord, Lord,’ will enter the kingdom of heaven, but he who does the will of My Father who is in heaven will enter. 22“Many will say to Me on that day, ‘Lord, Lord, did we not prophesy in Your name, and in Your name cast out demons, and in Your name perform many miracles?’ 23“And then I will declare to them, ‘I never knew you; DEPART FROM ME, YOU WHO PRACTICE LAWLESSNESS.’

Luke 13:25-30
25“Once the head of the house gets up and shuts the door, and you begin to stand outside and knock on the door, saying, ‘Lord, open up to us!’ then He will answer and say to you, ‘I do not know where you are from.’ 26“Then you will begin to say, ‘We ate and drank in Your presence, and You taught in our streets’; 27and He will say, ‘I tell you, I do not know where you are from; DEPART FROM ME, ALL YOU EVILDOERS.’ 28“In that place there will be weeping and gnashing of teeth when you see Abraham and Isaac and Jacob and all the prophets in the kingdom of God, but yourselves being thrown out. 29“And they will come from east and west and from north and south, and will recline at the table in the kingdom of God. 30“And behold, some are last who will be first and some are first who will be last.”
Summary:

Already But Not Fully Accessible

In some passages it is clear that the kingdom of God is already present. Jesus also talks about the Kingdom in the future, and we know that our lives in the future Kingdom will be better than our current lives. That's why The “Already But Not Yet” view says that the Kingdom is partially here now, but it is not yet fully realized.

My view is that the Kingdom is completely “here” now, but it is not fully accessible. The Kingdom is Spiritual. The Bible says: “ flesh and blood but cannot inherit the kingdom of God”. Since we are in flesh bodies we don’t have complete access to it. There is a Spiritual Kingdom, The Kingdom of God, where Jesus reigns. There is also a physical kingdom in which we live. Our flesh bodies tie us to this physical kingdom and our souls yearn for the Spiritual Kingdom. The Holy Spirit was put in us to link us to the Spiritual Kingdom of God.
When we declare Jesus as Lord we are declaring ourselves as being under the authority of Jesus’ Kingdom even though we are residents here on earth. We live as ambassadors representing Jesus’ Kingdom.

The Kingdom is Complete

In Luke 16 Jesus declares that His coming marks the end of an era:

There are many verses that point to “the last days” beginning when Jesus came.

For instance,
Hebrews 1:1-2
God, after He spoke long ago to the fathers in the prophets in many portions and in many ways, 2 in these last days has spoken to us in His Son, whom He appointed heir of all things, through whom also He made the world.
Last means there is nothing after it. “Last meal” means you will not have a meal after that. The Kingdom of God began with Christ and is never ending. This is the last kingdom.

The Kingdom won’t change. Only our access to the Kingdom will change. The Garden of Eden was God’s original Kingdom created to have intimate fellowship with man. When Adam sinned he was kicked out of the Garden of Eden. God put cherubim to guard the entrance so that Adam wouldn’t have access to the Garden. The Garden didn’t go away just because Adam lost access. The Garden was still there, Adam just didn’t have access to it. Similarly the new Kingdom of God exists, but we don’t have full access to it.
As citizens of the Kingdom of God, we can harness some of its power through the Holy Spirit. We can call upon the name of Jesus to gain some level of access, but when we receive our glorified bodies we will have full access.

Many Jews viewed Jesus as being the Messiah who was going to establish this Kingdom. When He died this idea was seemingly crushed. The Jews didn’t understand the concept that the the Messiah had come as a sacrifice for their sins to bring a Spiritual Kingdom.
Jesus defeated sin and death and inaugurated a Spiritual Kingdom within His followers. This Kingdom will be fully realized after the final judgment when all who remain will be in spiritual bodies and will be completely obedient to the rule of God.

The Kingdom actually exists right now as a parallel realm
Each day we choose which kingdom we want to represent.

Posted by Unchained Disciples at 9:47 PM