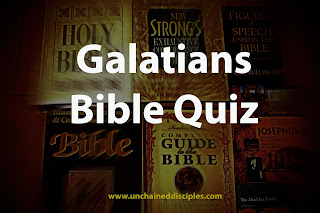 1. The group of people who were telling the Galatians they needed to be circumcised were known as:
Answer: 1 - The Judaizers
From the lesson: Galatians Chapter 1

2. The reason the Judaizers wanted the Galatian Gentiles to become circumcised was because:
Answer: 4 - All of the above
From the lesson: Galatians Chapter 1

4. Who taught Paul the gospel?
Answer: 1 - Jesus
Galatians 1:11-12
11 For I would have you know, brethren, that the gospel which was preached by me is not according to man.
12 For I neither received it from man, nor was I taught it, but I received it through a revelation of Jesus Christ
From the lesson: Galatians Chapter 1

5. Which apostles did Paul name as being reputable, when he went to Jerusalem to get consensus on the decision on if Jews needed to be circumcised?
2 - James, Peter, and John
Galatians 2:7-8
7But on the contrary, seeing that I had been entrusted with the gospel to the uncircumcised, just as Peter had been to the circumcised 8(for He who effectually worked for Peter in his apostleship to the circumcised effectually worked for me also to the Gentiles),
9and recognizing the grace that had been given to me, James and Cephas and John, who were reputed to be pillars, gave to me and Barnabas the right hand of fellowship, so that we might go to the Gentiles and they to the circumcised.
From: Galatians Chapter 2

6. When Paul confronted Peter, it was because:
4 - All of the above
The law said that Jews shouldn’t associate with Gentiles, but under the gospel we are all equal.  By choosing not to associate with the Gentiles and following the law, Peter was going against the gospel.  This shows us that not emphasizing the gospel should be of more severe consequence than not following the law.
Galatians 2:11-14
11But when Cephas came to Antioch, I opposed him to his face, because he stood condemned. 12For prior to the coming of certain men from James, he used to eat with the Gentiles; but when they came, he began to withdraw and hold himself aloof, fearing the party of the circumcision. 13The rest of the Jews joined him in hypocrisy, with the result that even Barnabas was carried away by their hypocrisy. 14But when I saw that they were not straightforward about the truth of the gospel, I said to Cephas in the presence of all, “If you, being a Jew, live like the Gentiles and not like the Jews, how is it that you compel the Gentiles to live like Jews?
From: Galatians Chapter 2

8. How was Abraham justified?
1 - By faith
Galatians 3:6-9
6So also Abraham “believed God, and it was credited to him as righteousness.  7 Understand, then, that those who have faith are children of Abraham.8 Scripture foresaw that God would justify the Gentiles by faith, and announced the gospel in advance to Abraham: “All nations will be blessed through you.”d 9So those who rely on faith are blessed along with Abraham, the man of faith.
From: Galatians Chapter 3

9. Anyone who tries to achieve salvation by following the law is…?
2 - Under a curse
Galatians 3:10-12
10For all who rely on the works of the law are under a curse, as it is written: “Cursed is everyone who does not continue to do everything written in the Book of the Law.”e 11Clearly no one who relies on the law is justified before God, because “the righteous will live by faith.”f 12The law is not based on faith; on the contrary, it says, “The person who does these things will live by them.”
From: Galatians Chapter 3

10. We know Abraham wasn’t made righteous by the law because:
1 - The law came 430 years after Abraham
God’s promise to Abraham and his descendents can’t be based on following the law because the promise was made before the law existed.
Galatians 3:16-17
16The promises were spoken to Abraham and to his seed. Scripture does not say “and to seeds,” meaning many people, but “and to your seed,”imeaning one person, who is Christ. 17What I mean is this: The law, introduced 430 years later, does not set aside the covenant previously established by God and thus do away with the promise. 18For if the inheritance depends on the law, then it no longer depends on the promise; but God in his grace gave it to Abraham through a promise.
From: Galatians Chapter 3

11. When Paul warned the Galatians not to go back to their old ways, he was referring to:
1 - Going back to their pagan religious traditions
Galatians 4:8-11
8However at that time, when you did not know God, you were slaves to those which by nature are no gods. 9But now that you have come to know God, or rather to be known by God, how is it that you turn back again to the weak and worthless elemental things, to which you desire to be enslaved all over again?
10You observe days and months and seasons and years. 11I fear for you, that perhaps I have labored over you in vain.
From: Galatians Chapter 4

12.  Paul used the story of Sarai and Hagar to show an analogy of what?
4 - All of the above
Galatians 4:21-26
21Tell me, you who want to be under law, do you not listen to the law? 22For it is written that Abraham had two sons, one by the bondwoman and one by the free woman. 23But the son by the bondwoman was born according to the flesh, and the son by the free woman through the promise.24This is allegorically speaking, for these women are two covenants: one proceeding from Mount Sinai bearing children who are to be slaves; she is Hagar. 25Now this Hagar is Mount Sinai in Arabia and corresponds to the present Jerusalem, for she is in slavery with her children. 26But the Jerusalem above is free; she is our mother.
From: Galatians Chapter 4

13. Who did Paul say had fallen from grace?
2 - Those who followed the law thinking it would bring them salvation
Galatians 5:4
4 You have been severed from Christ, you who are seeking to be justified by law; you have fallen from grace.
Paul is telling the Galatians that if they think that following the law is what saves them, then they are no longer covered by the gospel.  Only those who understand that the good news is that Christ’s death alone set you free will receive His salvation through faith.
From: Galatians Chapter 5

17. Which of these was not a deed of the flesh listed by Paul?
4 - Drinking alcohol
Galatians 5:19
19 Now the deeds of the flesh are evident, which are: immorality, impurity, sensuality, 20 idolatry, sorcery, enmities, strife, jealousy, outbursts of anger, disputes, dissensions, factions, 21 envying, drunkenness, carousing, and things like…
He lists drunkenness not merely drinking
From: Galatians Chapter 5

19. What should you share with those who teach you the word?
1 - All good things
Galatians 6:6
The one who is taught the word is to share all good things with the one who teaches him.
From: Galatians Chapter 6

20. In Galatians, what did Paul say that he boasts about?
4 - The Cross
Galatians 6:14
14 But may it never be that I would boast, except in the cross of our Lord Jesus Christ, through which the world has been crucified to me, and I to the world.

From: Galatians Chapter 6
Posted by Unchained Disciples at 11:45 PM