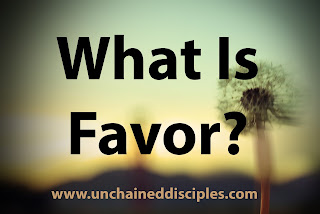 What does it means to have favor from God?   We examine the story of the Israelites creating the golden calf and God's desire to kill them.

We have been  challenging various doctrines by comparing them with scripture.

Favor
To favor means to give special regard to; to treat with goodwill; to show exceptional kindness to someone. Sometimes, it means to show extra kindness in comparison to the treatment of others; in other words, preferential treatment.

What Is God’s Favor?

Job 1:8-9
8Then the Lord said to Satan, “Have you considered my servant Job? There is no one on earth like him; he is blameless and upright, a man who fears God and shuns evil.”
9“Does Job fear God for nothing?” Satan replied. 10“Have you not put a hedge around him and his household and everything he has? You have blessed the work of his hands, so that his flocks and herds are spread throughout the land.

Example: when I got my job

Can be different in different areas of your life:

Is there a correlation between faith and favor?

Is salvation the result of favor?

Did we choose God or did God choose us?

The doctrine of unconditional election is based on the belief that God chooses (or elects) to do everything that He does in whatever way He best sees fit. When He acts, He does so only because He willfully and independently chooses to act. According to His own nature, predetermined plan, and good pleasure, He decides to do whatever He desires, without pressure or constraint from any outside influence.

The doctrine of unconditional salvation assumes that Christians are chosen by God and not vice versa.

Ephesians 1:3-6
3Blessed be the God and Father of our Lord Jesus Christ, who has blessed us with every spiritual blessing in the heavenly places in Christ, 4just as He chose us in Him before the foundation of the world, that we would be holy and blameless before Him. In love 5He predestined us to adoption as sons through Jesus Christ to Himself, according to the kind intention of His will, 6to the praise of the glory of His grace, which He freely bestowed on us in the Beloved.

Evangelicalism is a worldwide, transdenominational movement within Protestant Christianity which maintains the belief that the essence of the gospel consists of the doctrine of salvation by grace through faith in Jesus Christ's atonement. Evangelicals believe in the centrality of the conversion or the "born again" experience in receiving salvation, in the authority of the Bible as God's revelation to humanity, and in spreading the Christian message.

We hear teaching supporting both of these ideas in church, even though these doctrines are diametrically opposed.  Both can’t be fully true.

Our church doesn’t take a side on this issue. ^

God Wants to Kill the Israelites

The Favor of Moses

Exodus 33: 12
12Then Moses said to the LORD, “See, You say to me, ‘Bring up this people!’ But You Yourself have not let me know whom You will send with me. Moreover, You have said, ‘I have known you by name, and you have also found favor in My sight.’

Exodus 32:7-14
7Then the LORD spoke to Moses, “Go down at once, for your people, whom you brought up from the land of Egypt, have corrupted themselves.
8“They have quickly turned aside from the way which I commanded them. They have made for themselves a molten calf, and have worshiped it and have sacrificed to it and said, ‘This is your god, O Israel, who brought you up from the land of Egypt!’”
9The LORD said to Moses, “I have seen this people, and behold, they are an obstinate people. 10“Now then let Me alone, that My anger may burn against them and that I may destroy them; and I will make of you a great nation.”
11Then Moses entreated the LORD his God, and said, “O LORD, why does Your anger burn against Your people whom You have brought out from the land of Egypt with great power and with a mighty hand?
12“Why should the Egyptians speak, saying, ‘With evil intent He brought them out to kill them in the mountains and to destroy them from the face of the earth’? Turn from Your burning anger and change Your mind about doing harm to Your people.
13“Remember Abraham, Isaac, and Israel, Your servants to whom You swore by Yourself, and said to them, ‘I will multiply your descendants as the stars of the heavens, and all this land of which I have spoken I will give to your descendants, and they shall inherit it forever.’”
14So the LORD changed His mind [nacham - to be sorry; console oneself] about the harm which He said He would do to His people.

This story contradicts the doctrine that God does whatever He does with no outside influence.

Was God Going to Kill the Israelites?

Exodus 32:35
35 Then the LORD smote the people, because of what they did with the calf which Aaron had made.

Exodus 20:1-51 Then God spoke all these words, saying,2 "I am the LORD your God, who brought you out of the land of Egypt, out of the house of slavery.3 "You shall have no other gods before Me.4 "You shall not make for yourself an idol, or any likeness of what is in heaven above or on the earth beneath or in the water under the earth.5 "You shall not worship them or serve them; for I, the LORD your God, am a jealous God, visiting the iniquity of the fathers on the children, on the third and the fourth generations of those who hate Me,

In Deuteronomy God commanded that anyone who worshipped another god should be put to death.

We have a death penalty right now here in America.
If a judge sentences a convicted murderer to death is he being unmerciful, or is he being just?

What are you choosing to worship?

But let’s not stretch the worship and idolatry application too far.

How would this play into prayer requests such as healing?

God is compelled to show justice. But if those with favor intercede and request mercy, God may be less obligated to do so.

God is compelled to exact justice, but He is not obligated to.

This sheds light on this difficult verse...

We see that not all who are God’s elect have the same level of favor.

There is a level of favor from God which allows you:

We saw this level of favor exemplified in Moses.

But some can only focus on obtaining favor to get a new house or job.

Moses acted as an intermediary between God and the Israelites

He interceded so that the Israelites wouldn’t get what they deserved.

Exodus 32:32
32“But now, if You will, forgive their sin—and if not, please blot me out from Your book which You have written!”

Moses left His home to travel with Israelites for the rest of his life until he died.

We too have a mediator  that was willing to die for our sins.

Jesus temporarily gave up His position in Heaven, and sacrificed His life so that we might be saved for the offenses we commit against God every day.

Clarification from the Last Lesson

Why does God resort to genocide and destruction?
https://christianity.stackexchange.com/questions/5185/why-does-god-resort-to-genocide-and-destruction

An inheritance is something that you don’t work for.   You get it because of your relationship with the father.

1 Peter 1:3-5
Blessed be the God and Father of our Lord Jesus Christ, who according to His great mercy has caused us to be born again to a living hope through the resurrection of Jesus Christ from the dead,4 to obtain an inheritance which is imperishable and undefiled and will not fade away, reserved in heaven for you,5 who are protected by the power of God through faith for a salvation ready to be revealed in the last time.

What does it mean that our inheritance is “through faith”?

Deuteronomy 17:2-5
2“If there is found in your midst, in any of your towns, which the LORD your God is giving you, a man or a woman who does what is evil in the sight of the LORD your God, by transgressing His covenant, 3and has gone and served other gods and worshiped them, or the sun or the moon or any of the heavenly host, which I have not commanded, 4and if it is told you and you have heard of it, then you shall inquire thoroughly. Behold, if it is true and the thing certain that this detestable thing has been done in Israel, 5then you shall bring out that man or that woman who has done this evil deed to your gates, that is, the man or the woman, and you shall stone them to death.
Posted by Unchained Disciples at 12:07 AM