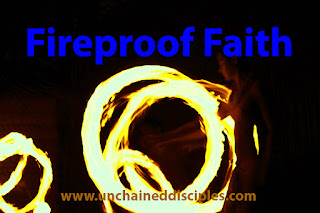 Sometimes God delivers you from the fire; sometimes he makes you fireproof.  A look at sustaining faith through the story of Daniel 3 - Shadrach, Meshach, and Abednego in the blazing furnace.

Fireproof Faith
What would you do if you won the lottery?


I’m about to reveal to some of you that Santa Claus is not real…
It will be hard to accept for many ...

Sometimes God rescues you from the fire; sometimes He makes you fireproof.

Example: when laid off told not to work

There is delivering faith and there is sustaining faith

Sometimes God will deliver you from the fire

Other times God will make you fireproof

Delivering faith is when you're going through a trial

Which one would you rather have and why?

Sustaining faith is when God doesn't deliver you but gives you the strength to make it.

Everyone had to worship this statue.

Exodus 20:3
"You shall not make for yourself an idol, or any likeness of what is in heaven above or on the earth beneath or in the water under the earth.

Do people pray to statues today?

What else do Christians worship?

We’re not supposed to worship anything other than God.

What about the cross?

Daniel 3:13-18
13Furious with rage, Nebuchadnezzar summoned Shadrach, Meshach and Abednego. So these men were brought before the king, 14and Nebuchadnezzar said to them, “Is it true, Shadrach, Meshach and Abednego, that you do not serve my gods or worship the image of gold I have set up? 15Now when you hear the sound of the horn, flute, zither, lyre, harp, pipe and all kinds of music, if you are ready to fall down and worship the image I made, very good. But if you do not worship it, you will be thrown immediately into a blazing furnace. Then what god will be able to rescue you from my hand?”
16Shadrach, Meshach and Abednego replied to him, “King Nebuchadnezzar, we do not need to defend ourselves before you in this matter. 17If we are thrown into the blazing furnace, the God we serve is able to deliver us from it, and he will deliver usc from Your Majesty’s hand. 18But even if he does not, we want you to know, Your Majesty, that we will not serve your gods or worship the image of gold you have set up.”

But Even if He Does Not…

Do they have doubt?  Is this fireproof faith if they have a “but even if…”?

I’ve seen preachers skip this verse in sermons.  This verse contradicts what we’re currently taught about what it means to have faith.

But when in fact, the “but even if” is what defines fireproof faith.

Fireproof Faith doesn’t mean that unpleasant things will never happen to us.

Were the apostles rich?

Did the other disciples have faith?

In “The Way”, the original church, were they rich?

Maybe they weren't taught about sozo...

Paul lived with a thorn in his flesh that he knew God could remove.

Did you ever pray for someone who didn’t get healed?

There is power in the spoken word and in positive thinking

God is in control, not you!

The Santa Clause doctrine makes you selfish and self centered

Fireproof Faith is when you can say Lord if you don't do anything else for me...that's good enough.

God didn't deliver them from the fire.  He made them fireproof.

What We Learn from the 3 Hebrew Boys

God got the glory

God is more likely to act when you have faith.

We are all in Babylon?

We are all  asked to compromise our faith at times.

Some of us have Nebekenezers in our lives that want us to bow to the ways of the world.

<what are your examples?>

There is delivering faith and there is sustaining faith.

Is God the center of your universe... or are you?

We can’t presume that God has to do what we want.

Fireproof faith says that even if I don’t get what I want, I will be faithful to God

We should pray believing that God can, but not presuming He must do what we want.

Everyone who is saved must believe in Jesus, but it is the power of Christ that saves, not the power of your faith.

Yes our faith saves us from the flames of hell...Fireproof Faith.

But faith is only the conduit, not the source of the power.  Faith is our connection to the power it is not the power itself.

The value of our faith doesn’t come from us but from the one in whom our faith lies.  At the end of the day, the healing, the deliverance, the results are not contingent on the quality of our faith, but on the Healer, on the deliverer on the resolver. It is through Christ that we get the results.

In John 9, the man who was born blind didn’t ask to be healed.  He was healed completely by grace.  Not because of his own faith.

Everyone whom Jesus wanted to be healed was healed. Sometimes He healed those who expressed their faith in Him, and He made a point of emphasizing the condition of their heart: “Your faith has made you well.” Other times, out of mercy, He healed those who had no faith and the miracle is what drew them to Him.  The signs drew them to having faith in Jesus.  For many faith wasn’t the reason for the miracle; but the miracle was the reason for the faith.  The reason for each of Jesus’ healings was so that God would get the glory.  Jesus only performed miracles that would bring glory to God.

At the end of the day, it is God who decides whether we are healed, or delivered from our trials.   Our job is to remain confident that God can deliver us, and that if we ask Him and it is His will that He will deliver us.

But we must at the same time be at peace if it is not God’s will to give us what we desire.  Knowing that whatever the future holds is a future with God.  And at the end of the day, that is all we really need.

Scholarly Examination of the Book of Daniel

My bible is clean
My cookbook is full of stains
My diet is wrong
--M. Leadon

The stories supplement each other to make the point that the God of the Jews will deliver those who are faithful to him.

How Did the Apostles Die?
http://channel.nationalgeographic.com/killing-jesus/articles/how-did-the-apostles-die/

What did Jesus mean when He told people, “Your faith has made you well”?
https://www.gotquestions.org/your-faith-has-made-you-well.html

Posted by Unchained Disciples at 11:11 PM