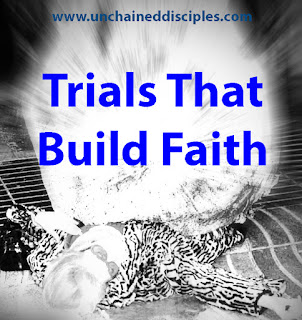 Why do bad things happen to good people?   How does God prepare us for our destiny?

In this lesson we’ll study:


Life is a progressive strengthening of your faith in different areas.
We will examine one of the methods that God uses to strengthen our faith.

We will examine one scenario that shows us:

James 1:2-4
2Consider it all joy, my brethren, when you encounter various trials, 3knowing that the testing of your faith produces endurance. 4And let endurance have its perfect result, so that you may be perfect and complete, lacking in nothing.


How does God strengthen our faith?

Example: stop looking for work when laid off


It's important to understand God's character

When we expect something from God and He doesn’t deliver it, it weakens our faith

Why Do We Have Trials?

Some say  “God allowed it”


What this tells us is:

Preparing You For Your Destiny

Sometimes we think we're doing God’s will because you are doing the will of:

You need to ask God

You are ready to step into your destiny after you’ve decided to do whatever God tells you to do.

After you’ve surrendered to God, He will start preparing you

It's called “going through the wilderness”

We see this exemplified with young David.  God anointed him as king (the promise), but David did not receive the kingdom immediately.  He had to go through the wilderness first.


1 Samuel 16:11-13
11 And Samuel said to Jesse, “Are these all the children?” And he said, “There remains yet the youngest, and behold, he is tending the sheep.” Then Samuel said to Jesse, “Send and [d]bring him; for we will not sit down until he comes here.”
12 So he sent and brought him in. Now he was ruddy, with beautiful eyes and a handsome appearance. And the Lord said, “Arise, anoint him; for this is he.” 13 Then Samuel took the horn of oil and anointed him in the midst of his brothers; and the Spirit of the Lord came mightily upon David from that day forward. And Samuel arose and went to Ramah.

God Can Use Anyone


1 Samuel 19:9-10
9But an evil [harmful] spirit from the Lord came on Saul as he was sitting in his house with his spear in his hand. While David was playing the lyre, 10 Saul tried to pin him to the wall with his spear, but David eluded him as Saul drove the spear into the wall. That night David made good his escape.

David had to flee to the wilderness

Did God send an evil spirit?

...what does the bible say?

Again, God will use whoever or whatever He chooses to accomplish His will

But would God really use Satan? ...

Jesus in the Wilderness

Why did Jesus go into the wilderness?

Matthew 3:16 - Matthew 4:1
16 As soon as Jesus was baptized, he went up out of the water. At that moment heaven was opened, and he saw the Spirit of God descending like a dove and alighting on him. 17 And a voice from heaven said, “This is my Son, whom I love; with him I am well pleased.”
Matthew 4:1
1Then Jesus was led by the Spirit into the wilderness to be tempted[peirazó] by the devil.

peirazó: to make proof of, to attempt, test, tempt

This is God’s method

Joseph was tested after he got a promise from the Lord.


The Word Tested Him

Joseph had to go through the purification process


God Can Use Anyone


What to Do When We’re Tested

Sometimes it takes adversity to push us where we need to go.  Sometimes we get so comfortable in the path that we have chosen that it takes a major disruption to get us out of that lifestyle.

Just because you are uncomfortable doesn't mean you're not where you're supposed to be.

When God tests us, it's to find out what is in our hearts

Your heart is revealed by how you handle a trial

After God reveals your destiny to you, you will be tested by the enemy.

Tests from God are not meant to harm you, but to bring you into maturity.

1 Peter 5:10After you have suffered for a little while, the God of all grace, who called you to His eternal glory in Christ, will Himself perfect, confirm, strengthen and establish you.

The trial is meant to: perfect, confirm, strengthen and establish you.

Posted by Unchained Disciples at 11:52 AM