Leaning On Your Own Understanding 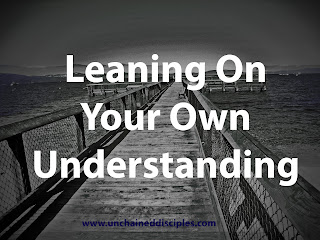 In this study we look at the consequences of doubting God and examine how we will often try to solve our issues our own way instead of taking God's suggestions.


Proverbs 3:5
5Trust in the LORD with all your heart
And do not lean on your own understanding.

Exodus 17:3-7
3But the people were thirsty for water there, and they grumbled against Moses. They said, “Why did you bring us up out of Egypt to make us and our children and livestock die of thirst?”
4Then Moses cried out to the Lord, “What am I to do with these people? They are almost ready to stone me.”
5The Lord answered Moses, “Go out in front of the people. Take with you some of the elders of Israel and take in your hand the staff with which you struck the Nile, and go. 6I will stand there before you by the rock at Horeb. Strike the rock, and water will come out of it for the people to drink.” So Moses did this in the sight of the elders of Israel. 7And he called the place Massaha and Meribahb because the Israelites quarreled and because they tested the Lord saying, “Is the Lord among us or not?”

God Got the Glory

Miracles are meant to glorify God


God won't get any glory if it seems overcomeable.


You don’t hear testimonies where people figured out the solution on their own.


A trial is a test that happens when something is bigger than your ability to fix it.

Some people need to attend a church where


They need proof through miracles that God is there


Jesus’ signs were meant to draw people to Him

The Sin of the Garden

Leaning on Your Own Understanding

Numbers 20:7-13
7The Lord said to Moses, 8“Take the staff, and you and your brother Aaron gather the assembly together. Speak to that rock before their eyes and it will pour out its water. You will bring water out of the rock for the community so they and their livestock can drink.”
9So Moses took the staff from the Lord’s presence, just as he commanded him. 10He and Aaron gathered the assembly together in front of the rock and Moses said to them, “Listen, you rebels, must we bring you water out of this rock?” 11Then Moses raised his arm and struck the rock twice with his staff. Water gushed out, and the community and their livestock drank.
12But the Lord said to Moses and Aaron, “Because you did not trust in me enough to honor me as holy in the sight of the Israelites, you will not bring this community into the land I give them.”
13These were the waters of Meribah [quarreling],a where the Israelites quarreled with the Lord and where he was proved holy among them.

Leaning on Your Own Understanding


Sometimes God is trying to do a new thing and we resort to what has always worked in the past.  We do this because of fear.  We do this to be in control.


“Because you did not trust in me enough to honor me”

God Can Use Anyone


If someone has spiritual gifts does that mean God approves of their behavior?
No


Because a ministry is large does it mean God approves of it?

God Won’t Turn His Back on His Sheep

This teaches us that God's love for His people is so great, he will use an imperfect instrument.


God would deal with Moses, but the people needed water - and so it was provided.


The Israelites probably thought Moses was in right standing with God


Don't put your faith in the gifted person.

God Won’t Turn His Back on His Servants

If God ordained what you're doing He will give you the grace to see it thru.
If you did it on your own God doesn't owe you that grace.

Is your faith “I can figure it out” type of faith?

The Benefits of Faith

Proverbs 3:5-8
5Trust in the LORD with all your heart
And do not lean on your own understanding.
6In all your ways acknowledge Him,
And He will make your paths straight.
7Do not be wise in your own eyes;
Fear the LORD and turn away from evil.
8It will be healing to your body
And refreshment to your bones.


Verse 8 says that trusting in the Lord will “be healing to your body”.

“Stress as a contributor to heart disease has been accepted by the medical community at least since the 1970s with the publication of the book Type A Behavior and Your Heart by Drs. Friedman and Rosenman.


Since then, factors such as low self-esteem, low socioeconomic status, inadequate social support, anger, hostility, and hopelessness have all been identified as causes of disease.


Stress may translate to dis-ease by altering the sympathetic nervous system (elevated adrenaline), the adrenal axis, inflammation, blood vessel malfunction, and increased clotting of the blood.


If stress can harm the heart, is the opposite true?


Fortunately we now have ample evidence that methods of avoiding or decreasing stress promote cardiovascular health and wellness.
-- Why Stress Can Kill You: A Cardiologist Explains  by Dr. Joel Kahn

This fact brings a new meaning to the verse:


John 3:16 - For God so loved the world, that he gave his only Son, that whoever believes in him should not perish but have everlasting life.

Why Stress Can Kill You: A Cardiologist Explains
http://www.mindbodygreen.com/0-8616/why-stress-can-kill-you-a-cardiologist-explains.html

Posted by Unchained Disciples at 2:51 AM

Email ThisBlogThis!Share to TwitterShare to FacebookShare to Pinterest
Labels: diabetes, doubt, faith, faith in ourselves, hit the rock, kidney disease, lack of faith, leaning on your own understanding, Meribah, miracles, Moses, peace, signs, speaking in tongues, stress, water from the rock