Review of Angels and the Spirit Realm (Part 1) 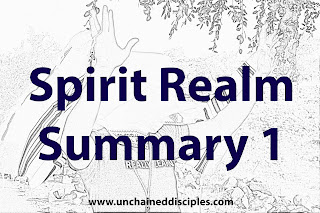 This is a summary of the first 13 lessons of the series: Angels and the Spirit Realm.  It also includes candid discussion after the study.


Face to Face With God (Theophanies)


Going Up the Mountain of God

The Angel of the Lord

God had a plan to restore all nations back to Him, and Jesus was a part of that plan from the beginning


Rev 1:4-5
4John,
To the seven churches in the province of Asia:
Grace and peace to you from him who is, and who was, and who is to come, and from the seven spiritsa before his throne, 5and from Jesus Christ, who is the faithful witness, the firstborn from the dead, and the ruler of the kings of the earth.

The Holy of Holies

The Holy of Holies represented the throne room of Heaven


Posted by Unchained Disciples at 11:37 PM