A Wheel Within A Wheel 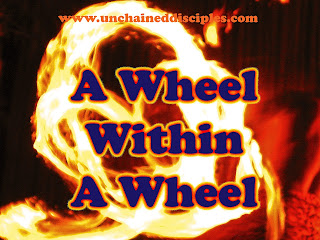 A study of the wheel within a wheel of Ezekiel's vision.  We discuss multiple views of what they represent and see how they are applicable to everyday life.

A Wheel Within a Wheel

What does a wheel within/intersecting a wheel look like?
One wheel at right angles to the other, like the equator and a meridian circle upon the globe. Like the lines around a basketball.

The ophanim or ofanim, also Ophde (Hebrew "wheels" ’ōphannīm; singular ’ōphān) refer to the wheels seen on Ezekiel's vision of the chariot in Ezekiel 1:15-21.

For some[who?] the Ophanim are also related to or equated as the "Thrones", since the Throne of God is usually depicted as being moved by wheels, in the vision of Daniel 7:9 (Old Testament), however the Thrones, (Gr. thronos) are a distinct form of celestial spiritual being usually portrayed as adoring elder men in Christian scripture. The cherubim carry, by moving the Ophanim, the throne of God.

Support for them being living beings:


Other Explanations of Ezekiel’s Vision

The different creatures represent different levels of closeness to God or “enlightenment”.  They are symbolic of the levels you reach when getting closer to God.
Climbing Jacob’s ladder.

Ezekiel 1:4
4As I looked, behold, a storm wind was coming from the north, a great cloud with fire flashing forth continually and a bright light around it, and in its midst something like glowing metal in the midst of the fire

The description is that of a space ship

Being covered with eyes represents a multitude of people

Israel was being judged


The Wheels represent the surrounding nations

The faces of the Cherubim

The wheel is the circular zodiac in the sky

The wheel within a wheel represents the celestial procession

The eyes covering the creatures and the wheels represent the stars

Satan took ⅓ or the stars


Prophesy of the New Testament

The four faces are the four gospel

The mobility of the wheels suggests the omnipresence of God; the eyes, His omniscience; and the elevated position, His omnipotence.

It presented God as being on a chariot-like throne, His glory both supreme and immanent, existing in and extending into all the created universe.

This vision served to assure them that God was still alive and still all powerful.


The Wheels are the Cycles of Life

Focus on the tree

This is how God teaches us

Each stage in our life or each assignment from God is a different cycle.  We stay in that cycle until we have learned what we need to learn in that cycle.

There are some cycles that need to be broken

We need to notice the cycles we are in.

What is God trying to tell you?

Summary - A Wheel Within A Wheel

Posted by Unchained Disciples at 1:02 AM