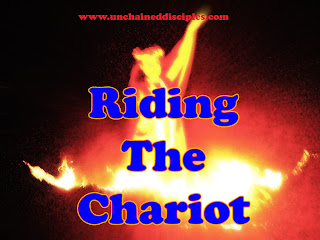 In this bible study we discover that God travels in a chariot of fire, and we explore whether or not we can ride one like Elijah did!

4 Cherubim in the Temple

We questioned last week that if the 4 Living Creatures of Revelation were cherubim, why were there only 2 cherubim represented above the ark whereas there are 4 in Heaven.  It came to my attention that although there were only 2 cherubim above the Ark of the Covenant, there were actually 4 cherubim around the presence of God in the temple.  This reinforces what we see in Revelations with the 4 Living Creatures.


1 Kings 6:23-28
23For the inner sanctuary he made a pair of cherubim out of olive wood, each ten cubits high. 24One wing of the first cherub was five cubits long, and the other wing five cubits—ten cubits from wing tip to wing tip. 25The second cherub also measured ten cubits, for the two cherubim were identical in size and shape. 26The height of each cherub was ten cubits. 27He placed the cherubim inside the innermost room of the temple, with their wings spread out. The wing of one cherub touched one wall, while the wing of the other touched the other wall, and their wings touched each other in the middle of the room. 28He overlaid the cherubim with gold.

Ezekiel 1:25-28
25 Then there came a voice from above the vault over their heads as they stood with lowered wings. 26 Above the vault over their heads was what looked like a throne of lapis lazuli, and high above on the throne was a figure like that of a man. 27 I saw that from what appeared to be his waist up he looked like glowing metal, as if full of fire, and that from there down he looked like fire; and brilliant light surrounded him. 28 Like the appearance of a rainbow in the clouds on a rainy day, so was the radiance around him.
This was the appearance of the likeness of the glory of the Lord. When I saw it, I fell facedown, and I heard the voice of one speaking.


Psalms 99:1
1The Lord reigns,
let the nations tremble;
he sits enthroned between the cherubim,
let the earth shake.

Ezekiel 10:9-13; 18-19
9I looked, and I saw beside the cherubim four wheels, one beside each of the cherubim; the wheels sparkled like topaz. 10As for their appearance, the four of them looked alike; each was like a wheel intersecting a wheel. 11As they moved, they would go in any one of the four directions the cherubim faced; the wheels did not turn aboutb as the cherubim went. The cherubim went in whatever direction the head faced, without turning as they went. 12Their entire bodies, including their backs, their hands and their wings, were completely full of eyes, as were their four wheels. 13I heard the wheels being called “the whirling wheels.”
...
18Then the glory of the Lord departed from over the threshold of the temple and stopped above the cherubim. 19While I watched, the cherubim spread their wings and rose from the ground, and as they went, the wheels went with them. They stopped at the entrance of the east gate of the Lord’s house, and the glory of the God of Israel was above them.

Daniel 7:9
9“As I looked,
“thrones were set in place,
and the Ancient of Days took his seat.
His clothing was as white as snow;
the hair of his head was white like wool.
His throne was flaming with fire,
and its wheels were all ablaze.

1 Chronicles 28:18
18and the weight of the refined gold for the altar of incense. He also gave him the plan for the chariot, that is, the cherubim of gold that spread their wings and overshadow the ark of the covenant of the Lord.

2 Samuel 22:10-11
10He parted the heavens and came down;
dark clouds were under his feet.
11He mounted the cherubim and flew;
he soared on the wings of the wind.

The Whirlwind and the Chariots of Fire

Ezekiel 1:4-6
4As I looked, behold, a storm wind[whirlwind or Hebrew “spirit-storm”] was coming from the north, a great cloud with fire flashing forth continually and a bright light around it, and in its midst something like glowing metal in the midst of the fire. 5Within it there were figures resembling four living beings. And this was their appearance: they had human form. 6Each of them had four faces and four wings.


Isaiah 66:15
15For behold, the LORD will come in fire
And His chariots like the whirlwind,
To render His anger with fury,
And His rebuke with flames of fire.

Psalms 68:17
17The chariots of God are tens of thousands
and thousands of thousands;
the Lord has come from Sinai into his sanctuary.g


It’s clear now that God rides upon a chariot which is contains cherubim.  And He has a great number of these chariots.

Chariots Are Another Gateway

We previously studied Jacob’s dream in which a ladder was the gateway from Heaven to earth.  Angels used his ladder to ascend and descend between Heaven and earth.   We later saw that Jesus referred to Himself as the ladder saying angels would descend and ascend on Him.


We now see that God ascends and descends while riding upon cherubim, and in His throne chariot.  Since the chariots are a method used to traverse between Heaven and earth they can be seen as another gateway to travel between Heaven and earth.
Jacob’s Ladder
Genesis 28:12
12 He had a dream in which he saw a stairway resting on the earth, with its top reaching to heaven, and the angels of God were ascending and descending on it.
We saw in Ezekiel’s vision that the top of the chariot rested beneath the firmament and the wheels touched the earth.
Ezekiel’s Wheels
Ezek 1:15
15 As I looked at the living creatures, I saw a wheel on the ground beside each creature with its four faces.


This chariot vehicle is another means of traversing between Heaven and earth.


Is God the only one who can ride these “chariots”?

2 Kings 2:1; 11-12
1When the Lord was about to take Elijah up to heaven in a whirlwind, Elijah and Elisha were on their way from Gilgal.
…
11 As they were walking along and talking together, suddenly a chariot of fire and horses of fire appeared and separated the two of them, and Elijah went up to heaven in a whirlwind. 12 Elisha saw this and cried out, “My father! My father! The chariots and horsemen of Israel!” And Elisha saw him no more. Then he took hold of his garment and tore it in two.


The Hebrew word used here for chariot is merkabah (Strongs #04818, 44 times).  It  is a term used for any wheeled carriage, vehicle, or wagon, irrespective of the number of wheels. The primary characteristic of a chariot is that it has wheels.  The word Merkaba or Merkava (Literally translated from Hebrew as Chariot of Light or Chariot of the Soul).

Some rabbis believe that it is dangerous to teach on Ezekiel’s visions so they forbade either the reading or the expounding of it.  Rabbinic orthodoxy tended to discourage speculation on the meaning of Ezekiel’s vision.  “No wise man is to share his understanding of the Merkabah with a person less enlightened than himself”.

Some think that these chariots could explain UFO sightings.   They argue that since the only vehicle of travel known in Ezekiel’s time was a chariot, he would have referred to any vehicle as a chariot.  They claim that Ezekiel’s description could be used to describe a metal spaceship with 4 propellers underneath it.


Other gateways for crossing between the natural and the spirit realm that we’ve already discussed include:


Other terms we’ve used for crossing between the natural and spiritual dimensions include:

Jeremiah 4:13
13Look! He advances like the clouds,
his chariots come like a whirlwind,
his horses are swifter than eagles.
Woe to us! We are ruined!


Psalms 18:9-10
9He parted the heavens and came down;
dark clouds were under his feet.
10He mounted the cherubim and flew;
he soared on the wings of the wind.


Psalms 80:1-2
1Hear us, Shepherd of Israel,
you who lead Joseph like a flock.
You who sit enthroned between the cherubim,
shine forth 2before Ephraim, Benjamin and Manasseh.
Awaken your might;
come and save us.

2 Kings 19:5
And Hezekiah prayed to the LORD: "LORD, the God of Israel, enthroned between the cherubim, you alone are God over all the kingdoms of the earth. You have made heaven and earth.

The Catholic hierarchy lists Thrones as separate beings from Cherubs.


Psalms 104:2-4
2The Lord wraps himself in light as with a garment;
he stretches out the heavens like a tent
3and lays the beams of his upper chambers on their waters.
He makes the clouds his chariot
and rides on the wings of the wind.
4He makes winds his messengers[angels],a
flames of fire his servants.

2 Kings 6:15-17
15Now when the attendant of the man of God had risen early and gone out, behold, an army with horses and chariots was circling the city. And his servant said to him, “Alas, my master! What shall we do?” 16So he answered, “Do not fear, for those who are with us are more than those who are with them.” 17Then Elisha prayed and said, “O LORD, I pray, open his eyes that he may see.” And the LORD opened the servant’s eyes and he saw; and behold, the mountain was full of horses and chariots of fire all around Elisha.
Posted by Unchained Disciples at 1:36 PM