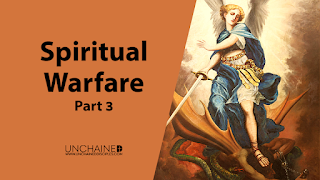 A look into witchcraft, voodoo, satanism, and the occult.

Witchcraft and Occultism in Our Culture

Worship: Out of My Way

Did you know witchcraft used to be illegal?

What is the symbol of witchcraft?

The US military allows your symbol for your religious affiliation on your headstone.   In 2007 the first Wiccan pentacle was put on a headstone.

Witchcraft and occultism is becoming more and more accepted in our society.

9 “When you enter the land which the Lord your God is giving you, you shall not learn to imitate the detestable things of those nations. 10 There shall not be found among you anyone who makes his son or his daughter pass through the fire, one who uses divination, a soothsayer, one who interprets omens, or a sorcerer, 11 or one who casts a spell, or a medium, or a spiritist, or one who consults the dead. 12 For whoever does these things is detestable to the Lord; and because of these detestable things the Lord your God is going to drive them out before you. 13 You are to be blameless before the Lord your God. 14 For these nations, which you are going to dispossess, listen to soothsayers and diviners, but as for you, the Lord your God has not allowed you to do so.

These things are becoming more prevalent in our culture

Witchcraft is on the Rise

There are occult ideas in

What are some recent movies that feature witchcraft / occult?

Spiritual But Not Religious

Has anybody ever been on a dating site?

What’s something people put for their religion nowadays?

People are turning from organized religion

Churches are saying we don’t want religion we want relationship

People turn to other spirits or witch doctors for

“ Magic is defined as a large body of beliefs and practices regarding supernatural powers which stand outside of the world of formal religion and yet are widely known and help people deal with their anxieties and insecurities.   It involves rituals to invoke supernatural powers to ward off misfortune or to alleviate it.”

How can we be:

Learning not just what The Word instructs us to do, but learning how to implement it in our lives

We want to become aware of our issues and empowered to manage/fix them.

This is the primary way we fight spiritual warfare

18 With every prayer and request, pray at all times in the Spirit, and with this in view, be alert with all perseverance and every request for all the saints

We have an unseen enemy…the devil

We fight him with

We looked at the following stories to see how the satan operates:

Satan tries to tempt us with:

We need to realize that we have an enemy

There are other spirit beings

3“You shall have no other gods [elohim] before Me.

God’s warns us against issues

Idol worship is worshiping these other spirits

In the Biblical they turned to spirits for

In modern times, people still seek supernatural means to get the things they desire.

God strictly forbids Christians from participating in these practices.

Melissa gave her testimony of what happened when she sought a psychic, and after being threatened with a curse she turned to a Christian friend for aid and became a devout Christian.

What is the Occult?

"a secret society to study alchemy and the occult"

various theories and practices involving a belief in and knowledge or use of supernatural forces or beings. Such beliefs and practices—principally magical or divinatory—have occurred in all human societies throughout recorded history, with considerable variations both in their nature and in the attitude of societies toward them.

Some occult practices include:

Involving other spirits or powers beyond what’s natural or common

Role of the Expert

A lot of priests/top people are

Why do people turn to occult practices?

find out something that you didn’t know about

And that will give you

Occult Practices From Our Culture

1Now the LORD said to Abram,

“Go from your country,

And from your relatives

And from your father’s house,

To the land which I will show you;

2And I will make you into a great nation,

And I will bless you,

And make your name great;

And you shall be a blessing;

3And I will bless those who bless you,

And in you all the families of the earth will be blessed.”

Many of our cultures of origin have their own religious practices.   We are called to leave our land and separate from these practices.

For generations, African beliefs and practices regarding witchcraft and traditional healing have been located at the intersection between the natural world and the supernatural world.

No distinction between food and medicine

Who knows what Chinese animal year they were born in?

What are some religions/groups that have occult practices?

No scripture or sacred text

They practice a variety of the occult practices listed

Wicca is a nature-based spiritual practice dating back thousands of years.  Practitioners strive to connect with the universe.  Wiccans worship the Goddess and God, honoring the duality in nature.

Comes from the Celtic word wicca

Those who practice witchcraft have the following for believes

The goal of witchcraft is spiritual fulfillment.

Interviewed on BBC watched by 12 million

Large witch groups are forming on TikTok and Twitter.

Opposition from “the learned magician”, a practitioner who takes the occult seriously as a complex and scholarly pursuit, delighting in the theory, the complexity of rituals, and the broader philosophical implications of their beliefs.

How to Recognize a Witch

Who has heard of voodoo?

Came into America through the slaves in New Orleans

The Spiritual force of voodoo is a sacred forest in Benin

“There is one god who created the universe

This was the greatest challenge to Christianity in the 1990s

They believe in the God and Satan of the bible, but view of Satan as the good guy

Worship of the flesh and not any spirit

They stress the balance of light and dark and that each depends upon the other.

While Satanism revels in physical existence and Christianity focuses more on spirituality, Luciferians see their religion as one that seeks a balance of both, that human existence is an intersection of the two.

Lucifer isn’t “the devil” but the liberator.

May not consider themselves satanists

Demonolatry is basically the worship of demons.

Some sects see each demon as a separate force or energy that can be used to aid in the practitioner's rituals or magic.

Ability to command demons to do your bidding, as some Jewish and Islamic traditions have believed of King Solomon.

“To my further bemusement, it seemed that the tradition of Solomonic magic had recently faced accusations that its strict and authoritative approach to the command of demons amounted to a form of abuse, akin to domestic violence.”

Also a rise in:

Season of the witch

Superstition, astrology and the occult

What is Santeria? All about my religion

You need to renounce/repent from:

You need to go back and renounce some things.

Witchcraft not only gives that honor to the devil which is due to God alone, but bids defiance to the divine providence, wages war with God’s government, puts his work into the devil’s hand, expecting him to do good and evil. By our law, consulting, covenanting with, invocating, or employing any evil spirit to any intent whatever, and exercising any enchantment, charm, or sorcery, whereby hurt shall be done to any person, is made felony, without benefit of clergy; also pretending to tell where goods lost or stolen may be found, is an iniquity punishable by the judge, and the second offense with death.

The Celts or a collection of tribes that existed in Ireland, Britain, France and parts of Spain

They have deities that live in the underworld, but still interact with humans

Many Celtic gods and goddesses are localized

In our country religious experience usually takes one of three forms

They make a point of rejecting any church type of religion

They may reject “the world“

Characterized by mysticism in its ritual and mode of thinking

Posted by Unchained Disciples at 11:50 PM