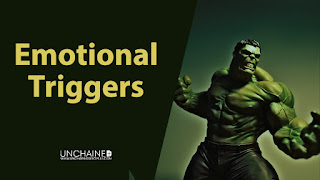 Emotional triggers are when something happens and you have a big emotional response that is disproportionate to what is happening.

How could something your boss says bother your co-worker but not bother you?

Why would something that Trump says bother one person but doesn’t  bother another democrat?

19You know this, my beloved brothers and sisters. Now everyone must be quick to hear, slow to speak, and slow to anger; 20for a man’s anger does not bring about the righteousness of God.

Can someone make you mad?

We’re not just supposed to get eternal life

We want to not only to seek results, but also to value the processes of growing.

2 approaches to protecting ourselves from emotional hurt

Proactive shielding is the behavior or personality that you’ve adopted

Reactive shielding is usually a response to experiencing negative emotions

It’s your approach to life

Some common proactive shielding behaviors include:

Tied to your self identity

Reactive  shielding has the goal of keeping you from experiencing hurt

without regard for the consequences

Anything that will distract them and make them feel better

Reactivate behavior can be triggered by

Reactivate behavior aims to eliminate or distract from the immediate

The Goal of Wholeness

You are in control of your emotions and not the other way around.

you break patterns related to

You feel more integrated and solid, but with a wide range of emotion and expression.

When life becomes stormy, you sense the deep peace that lies beneath the waves you are riding. From that centered place, you can calm your behavior and the people around you.

Broke the bonds of

You trust your emotions.

What Are Emotional Triggers?

It’s usually because whatever happened hit a deeper wound or a deeper insecurity.

Our bodies have a physical reaction because we are feeling threatened

Triggered when you feel

1 Now the man had relations with his wife Eve, and she conceived and gave birth to Cain, and she said, “I have gotten a manchild with the help of the LORD.”

2 Again, she gave birth to his brother Abel. And Abel was a keeper of flocks, but Cain was a tiller of the ground.

3 So it came about in the course of time that Cain brought an offering to the LORD of the fruit of the ground.

4 Abel, on his part also brought of the firstlings of his flock and of their fat portions. And the LORD had regard for Abel and for his offering;

5 but for Cain and for his offering He had no regard. So Cain became very angry and his countenance fell.

6 Then the LORD said to Cain, “Why are you angry? And why has your countenance fallen?

7 “If you do well, will not your countenance be lifted up? And if you do not do well, sin is crouching at the door; and its desire is for you, but you must master it.”

Why was Abel’s sacrifice accepted but not Cain’s?

Each offer in accordance with his occupation and pursuits

By faith Abel offered to God a better sacrifice than Cain, through which he was attested to be righteous, God testifying about his gifts, and through faith, though he is dead, he still speaks.

Why was Cain mad at Abel?

The Source of Our Triggers

It often begins in childhood

father saves a child from a dog

Your mind records how you felt during that first time experience

Movie Clip: Italian Job:  I had a bad experience

Story: Boy Who Was in the Way

Boy going to get some water

He internalized how to feel when someone

These are now triggers for him

Turns in a report to boss

Who is John really angry at?

John believes that he is angry at his boss

That is true, but the bigger truth is that even if his boss did do that he still shouldn’t have that big of a response

His wife tells him he is in the way

Now we have familiar curse passed down to the next generation

But who is John really angry at?

He was angry at his dad

Child was ignored by their parents

Child was left alone for long periods of time

Whenever you start to leave there is an argument

What Child Had to Say Wasn’t Important

Mom and dad didn’t listen to them too much

They Shouldn’t Feel That Way

You are saying that they shouldn’t need that

Summary: The Source of Triggers

We get triggered because of a bad experience

You’re triggered when someone

23Because of this, the kingdom of heaven is like a king who wanted to settle accounts with his servants. 24As he began the settlements, a debtor was brought to him owing ten thousand talents.f 25Since the man was unable to pay, the master ordered that he be sold to pay his debt, along with his wife and children and everything he owned.

26Then the servant fell on his knees before him. ‘Have patience with me,’ he begged, ‘and I will pay back everything.’

27His master had compassion on him, forgave his debt, and released him.

28But when that servant went out, he found one of his fellow servants who owed him a hundred denarii.g He grabbed him and began to choke him, saying, ‘Pay back what you owe me!’

29So his fellow servant fell down and begged him, ‘Have patience with me, and I will pay you back.’

30But he refused. Instead, he went and had the man thrown into prison until he could pay his debt.

31When his fellow servants saw what had happened, they were greatly distressed, and they went and recounted all of this to their master.

32Then the master summoned him and declared, ‘You wicked servant! I forgave all your debt because you begged me. 33Shouldn’t you have had mercy on your fellow servant, just as I had on you?’ 34In anger his master turned him over to the jailers to be tortured, until he should repay all that he owed.

35That is how My heavenly Father will treat each of you unless you forgive your brother from your heart.”

Forgiveness cancels the debt that they owe you

They no longer owe you

You feel the hurt when

This is the consequence of not forgiving

Be Angry But Do Not Sin

26 Be angry, and yet do not sin; do not let the sun go down on your anger,

27and do not give the devil a foothold.

Anger is not a sin

It is clear from this verse that being angry is not a sin.

Anger could cause you to

Unforgiveness is a sin

Do Not Let the Sun Go Down On Your Anger

I always thought this meant that you had to reconcile with the other person before nightfall.

But what I now see is that this verse doesn’t talk about reconciliation it only talks about anger.

You have to forgive at some point.

Your anger, no matter how righteous it is, turns into sin if you have it too long. It turns into unforgiveness.

Be angry, but there’s a time limit, in which your anger...becomes sin

Be Angry But Do Not Sin

18A hot-tempered person stirs up strife,

But the slow to anger calms a dispute.

Did you ever know someone who always seemed to push your buttons?

They knew how to push your buttons.

Take Responsibility for Your Reaction

You have to take responsibility for your life.

It is great to know what in your childhood caused the trigger, but the main goal is to determine what triggers you.

Be mindful of what certain people in your life can say or do that will trigger you.

What is it that made you

How Did it Make You Feel?

Ask yourself when he or she does this how do I feel?

Whatever comes to the surface… Don’t try to suppress it.

Don’t give your power away to someone else

If your attitude is a byproduct of your circumstance, your emotions will always be out of control

The Story You Tell Yourself

You are making the story the whole basis of the relationship with that person.

“He doesn’t care about me“

“She doesn’t appreciate everything I do”

In reality your wound is being triggered because of that one instance. You won’t believe how much that one sentence affects how do you now confront the person and how you feel regarding the situation

When Addressing the Issue

Changing the story to a positive possibility allows you to confront the person in a caring and loving way.

Changing your view allows the other person to tell their side of the story without you getting emotionally charged up.

How would I be experiencing this if I wasn’t adding any meaning?

Look for a Pattern

If there is a pattern with someone then you need to set boundaries and enforce them.

Triggering reveals something about you

Have you ever met anyone and they automatically had a negative opinion of you?

23 Watch over your heart with all diligence,

For from it flow the springs of life.

My glasses are cracked so I see you as a bad person even though you were not.

My heart is wounded so I see you as a bad person but you’re not.

Stop And take a breath deep

Tune in to what you are feeling

What are you feeling?

Observe what you were thinking

What about what happened makes you feel threatened?

What did I interpret this to mean?

What were you interpreting this to mean about you, or about life, or about God?

Reframe what you are thinking

Did you feel like you were being controlled or manipulated?

Could it be something else?

Remind yourself that you have the ability to say no.

This is not a real threat.

Move into self compassion

Don’t put yourself down

Don’t start the negative self talk

Trauma is the Gateway

How to Handle Intense Emotions | Stop Getting Triggered

The key to controlling your emotions

Gaining control over your emotions

23 Watch over your heart with all diligence,

For from it flow the springs of life.

Posted by Unchained Disciples at 11:21 AM