The Parable of the Dragnet 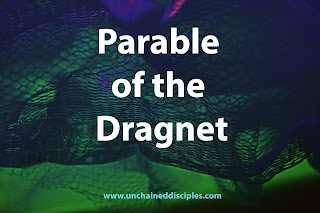 
Parable of the Dragnet

The parables of Jesus

A parable is a succinct, story that illustrates one or more instructive lessons or principles.
Jesus taught in parables because:

We have looked at 6 of the 8 parables about the Kingdom of God in Matthew 13
We discovered that the first four parables of Matthew 13 are warning us of opposition that will come against the Kingdom.

In the Parable of the Sower, Jesus tells us about Seed that fell on 4 types of soil:
Jesus said that this parable is the key to understanding all of the parables.

Explanation of the Parable of the Sower

Parable of the Wheat and the Weeds

Parable of the Leaven

Parable of the Mustard Seed

Parable of the Hidden Treasure

Parable of the Pearl

Parable of the Dragnet

The Parable of the Dragnet, or the Parable of the Various Kinds of Fish
Matthew 13:47-50
47 "Again, the kingdom of heaven is like a dragnet cast into the sea, and gathering fish of every kind;
48 and when it was filled, they drew it up on the beach; and they sat down and gathered the good fish into containers, but the bad they threw away.
49 "So it will be at the end of the age; the angels will come forth and take out the wicked from among the righteous,
50 and will throw them into the furnace of fire; in that place there will be weeping and gnashing of teeth.
This is the first parable about fishing

What is a Dragnet?

4522 /sagḗnē("drag-net") a weighted-net, drawn in as a drag-net.
There are three ways to go fishing
This is the only place where a dragnet is mentioned.
2 Methods
You can see that this fishing method was rather effective but the drawback was that the fishermen could not be selective while catching the fish. Their catch was always a mixed one. So when the boat returned to shore, the net would be pulled out into land and all kinds of fish, big and small, would be enclosed within it. The fish are then sorted out. Only fish that had commercial value were kept and put in containers. All the others, the bad ones, are thrown back into the water.

A dragnet picks up everything

Parable of the Wheat and Weeds Explained

Matthew 13:36-42
36Then He left the crowds and went into the house. And His disciples came to Him and said, “Explain to us the parable of the tares of the field.” 37And He said, “The one who sows the good seed is the Son of Man, 38and the field is the world; and as for the good seed, these are the sons of the kingdom; and the tares are the sons of the evil one; 39and the enemy who sowed them is the devil, and the harvest is the end of the age; and the reapers are angels. 40“So just as the tares are gathered up and burned with fire, so shall it be at the end of the age. 41“The Son of Man will send forth His angels, and they will gather out of [ek] His kingdom all stumbling blocks, and those who commit lawlessness, 42and will throw them into the furnace of fire; in that place there will be weeping and gnashing of teeth.
“This reference, as in the weeds, is not primarily to a mixed church, but to the division among mankind in general which the last judgment will bring to light.”
-- New Testament scholar R. T. France
Jesus isn’t warning that there are good and bad people in church
At that time all believers were Jews.  Therefore with the kingdom refer to the church or the Jews?
The sea is the world

The Net is The Message of the Kingdom of God

Matthew 13:47 "Again, the kingdom of heaven is like a dragnet cast into the sea, and gathering [sunagó] fish of every kind;
sunagó - to gather together
Notice the similarity to synagogue

It is interesting to notice that in Greek, ‘to gather (sunago)’ also means ‘to welcome.’
Matthew 25:35
For I was hungry, and you gave Me something to eat; I was thirsty, and you gave Me something to drink; I was a stranger, and you invited Me in [sunagó];
This means that the kingdom of God stretches out a welcoming hand to everybody. It is not exclusive in its invitation. Everybody without exception is invited to enter the kingdom of God. We know that a fishing net naturally gathers fish indiscriminately. ‘It gathers fish of every kind,’ we read in the parable.
If they had understood they would have realized now that the Kingdom was not just for Jews. It was for Gentiles as well.

The Net is The Gospel of the Kingdom of God

If we’re fishers of men what is the net?
The net is The gospel of the Kingdom of God
Implies that not only Jews will be brought into the Kingdom but Gentiles alike.

The net is not full yet.

Matthew 4:18-19
18Now as Jesus was walking by the Sea of Galilee, He saw two brothers, Simon who was called Peter, and Andrew his brother, casting a net into the sea; for they were fishermen. 19And He said to them, “Follow Me, and I will make you fishers of men.”
They don’t throw the bad fish back into the ocean
There are only two categories of fish:

Sorting is By Nature Not Behavior

By law Jewish people could only eat certain types of fish. They had to have scales they were an allowed to eat shellfish. By the old testament Jewish law. They were not throwing out the fish that bit them or the fish that were ugly they were separating the edible fish from the inedible fish.
The sorting will be done by your nature not by your behavior. This is not sorting out those who did more good things than bad things or those who didn’t do certain bad things or those who did this after they did the bad things. Jesus is throwing out those have a sin nature versus those who don’t. The sorting is based on weeding out those were born again versus those who are not born again.
Unlike fish who cannot change the type of fish they are people can change from a bad fish to a good fish.

Who Are the Bad Fish?

The bad fish are:
They are those in the parable of the soils that fell away because of:
They got captured in the net, but didn’t make the final cut.  You have to stay in the faith.

Matthew 13:41 The Son of Man will send forth His angels, and they will gather out of His kingdom all stumbling blocks, and those who commit lawlessness,
ek -  has a two-layered meaning ("out from and to") which makes it out-come oriented (out of the depths of the source and extending to its impact on the object).
Matthew 13:49  "So it will be at the end of the age; the angels will come forth and take out the wicked from among the righteous,
Both parables concern an end-times sorting, aided by angels, when believers will be separated from unbelievers once and for all.

The Wicked Will Always be Among Us

There will be both the wicked and the righteous until the end of the age.
Christians aren’t going to take over the world and convert all non-believers as some churches preach

Wailing and Gnashing of Teeth

Jesus talk more about hell then he did about: heaven or love.
Wailing and gnashing of teeth

There parable can be broken into two time periods:

The angels are responsible for the separation, so we should be focused on the fishing.
Right now is the time to fish

Spread The Word About Christ

Matthew 13:48
and when it was filled, they drew it up on the beach; and they sat down and gathered [anabibazo]  the good fish into containers, but the bad they threw away.
anabibazo = to make go up; to ascend
It paints a picture of us being raised from the dead at the final resurrection.
We will all be in that net that is drawn out of the sea to be sorted.
We were all born as unclean fish, and Jesus is the only one that can clean us.
Jesus is the only one who can clean your scales.  If you believe in Christ then you will be among the good fish.

Let’s follow the Way, let’s seek the truth, so we can live life in the Kingdom
Instructor: MIchael Leadon

Habakkuk 1:13-17
13Your eyes are too pure to look on evil,
and You cannot tolerate wrongdoing.
So why do You tolerate the faithless?
Why are You silent
while the wicked swallow up
those more righteous than themselves?
14You have made men like the fish of the sea,
like sea creatures with no ruler.
15The Chaldeans bring all of them up with a hook;
they catch them in their dragnet,
and gather them in their fishing net;
so they are glad and rejoice.
16Therefore they sacrifice to their dragnet
and burn incense to their fishing net,
for by these things their portion is sumptuous
and their food is rich.
17Will they, therefore, empty their net
and continue to slay nations without mercy?

I Never Knew You

Matthew 7:15-23
15“Beware of the false prophets, who come to you in sheep’s clothing, but inwardly are ravenous wolves. 16“You will know them by their fruits. Grapes are not gathered from thorn bushes nor figs from thistles, are they? 17“So every good tree bears good fruit, but the bad tree bears bad fruit. 18“A good tree cannot produce bad fruit, nor can a bad tree produce good fruit. 19“Every tree that does not bear good fruit is cut down and thrown into the fire. 20“So then, you will know them by their fruits.
21“Not everyone who says to Me, ‘Lord, Lord,’ will enter the kingdom of heaven, but he who does the will of My Father who is in heaven will enter. 22“Many will say to Me on that day, ‘Lord, Lord, did we not prophesy in Your name, and in Your name cast out demons, and in Your name perform many miracles?’ 23“And then I will declare to them, ‘I never knew you; DEPART FROM ME, YOU WHO PRACTICE LAWLESSNESS.’

https://christianity.stackexchange.com/questions/4192/whats-the-difference-between-the-judgment-seat-of-christ-and-the-great-white-th
The saved are present at the Judgment Seat of Christ, and the unsaved are present at the Great White Throne Judgment.  Is it possible that they take place at the same time? Yes. Both judgments are a judgment of earthly works. It could be that Paul and John just chose to focus on different aspects of the same event.
It is also possible that these judgments take place at different times. Nothing in scripture prevents them from occurring separately, and they are certainly referred to in different manners.
Ultimately, whether they take place together or not, the salient point is that both the saved and the unsaved will be judged for how they lived their lives.

Acts 24:14-15
14“But this I admit to you, that according to the Way which they call a sect I do serve the God of our fathers, believing everything that is in accordance with the Law and that is written in the Prophets; 15having a hope in God, which these men cherish themselves, that there shall certainly be a resurrection of both the righteous and the wicked.

Posted by Unchained Disciples at 8:27 PM