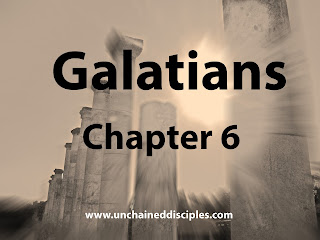 A study of chapter 6 of the book of Galatians.

Galatia is a region not a city or a single church.  There are many churches in that region.  We know of:

Paul was writing to address two issues:
Paul emphasized that:
Most other religions are based on self righteousness.  Where people attempt to please God or achieve a higher state of consciousness by their works.
If we trust in our works to save us we will be lost.  We are believing the wrong gospel if we think our salvation is based on:
If our own works could save us then we wouldn't need Jesus
The gospel is:

Addressing Trespasses of Others

Galatians 6:1-5
1 Brethren, even if anyone is caught in any trespass, you who are spiritual, restore [katartízō] such a one in a spirit of gentleness; each one looking to yourself, so that you too will not be tempted.
2 Bear one another's burdens, and thereby fulfill the law of Christ.
3 For if anyone thinks he is something when he is nothing, he deceives himself.
4 But each one must examine his own work, and then he will have reason for boasting in regard to himself alone, and not in regard to another.
5 For each one will bear his own load.

Example: see someone carrying 5 bags of groceries
When Paul wrote this the church shared their lives together
We are supposed to love our neighbor as ourselves
The flesh operates on the principle...your life for me
Jesus Christ came saying...my life for yours

Notice the word of caught
Caught in the act of doing what?

Who Should Address Them

James 1:26
If anyone thinks himself to be religious, and yet does not bridle his tongue but deceives his own heart, this man's religion is worthless.

People want to compare themselves with others to make themselves feel better
Example: Uncle’s funeral
We all have a deep need for recognition and acceptance
Some people have an inferiority complex and look at someone else and say “at least I’m better than them”
Only someone with selfless motives should address the person caught in a trespass
It's often the one who is proud and claims they don't sin and are judgmental that wants to point out someone else's sin
Who should  address someone who has sinned

How to Address Them

Ephesians 4:29
29 Let no unwholesome word proceed from your mouth, but only such a word as is good for edification according to the need of the moment, so that it will give grace to those who hear.
How to address
It doesn't say announce it to the church
If you’re going to correct someone it should be out of love.
How can you tell?

Galatians 6:6-10
6 The one who is taught the word is to share all good things with the one who teaches him.
7 Do not be deceived, God is not mocked; for whatever a man sows, this he will also reap.
8 For the one who sows to his own flesh will from the flesh reap corruption, but the one who sows to the Spirit will from the Spirit reap eternal life.
9 Let us not lose heart in doing good, for in due time we will reap if we do not grow weary.
10 So then, while we have opportunity, let us do good to all people, and especially to those who are of the household of the faith.
You should reward the teacher materially

Sowing to the Spirit

Sowing to the Flesh

Sowing to the flesh is satisfying your desires
Having Bad addictions and habits drive you to make bad decisions
You can’t win the battle against the world if you can’t win the battle against your own mind.
--Will Smith
You can't beat the demon you enjoy playing with
--Facebook quote
A lot of our problems are because we gave satan access to our lives

Our sins don’t determine whether or not we're saved
Example: witness for big case is above the law
When we sin there are consequences from:
So the consequences can either be:
Sowing and reaping means it's a consequences of your actions
Reaping what you sow is talking about all consequences other than from God
We need to repent from sins

Boasting in the Cross

Galatians 6:11-18
11 See with what large letters I am writing to you with my own hand.
12 Those who desire to make a good showing in the flesh try to compel you to be circumcised, simply so that they will not be persecuted for the cross of Christ.
13 For those who are circumcised do not even keep the Law themselves, but they desire to have you circumcised so that they may boast in your flesh.
14 But may it never be that I would boast, except in the cross of our Lord Jesus Christ, through which the world has been crucified to me, and I to the world.
15 For neither is the circumcision anything, nor uncircumcision, but a new creation.
16 And those who will walk by this rule, peace and mercy be upon them, and upon the Israel of God.
17 From now on let no one cause trouble for me, for I bear on my body the brand-marks of Jesus.
18 The grace of our Lord Jesus Christ be with your spirit, brethren. Amen.

With His Own Hand

Paul wrote this with his own hand
Romans 16:21-22
21 Timothy my fellow worker greets you, and so do Lucius and Jason and Sosipater, my kinsmen.
22 I, Tertius, who write this letter, greet you in the Lord.

Paul preached against circumcision even though it was unpopular at the time
Throughout the whole Bible there are many times when the majority of the people have a wrong believe or are following a wrong believe.
Some modern day examples include:

What Should We Boast About

The Judaizers wanted to boast on the number of people they had circumcised.
What do people boast about
Example
What do we boast in?
When satan accuses us or when we feel down what do you turn to to make us feel good?
What do we boast in?
Or what do you always seem to bring up?
Some people boast about their problems
If you're telling to everyone including people you just met you're boasting in it
Paul chose to “boast on his weakness” too

When your affirmation, recognition, acceptance and glory come from God
We need to realize that our value isn’t dependent on what we do or don’t do
Paul chose to boast on the cross alone
Paul had a lot he could have boasted about
But instead he boasted in his weakness
Because He knew it wasn't an empty tomb that saved us but it was a bloody cross
Boasting in the cross means that we boast in the fact that it is Jesus’ death on the cross that saves us
We boast in Christ alone
Presenter: Michael Leadon

1 Corinthians 9:11-14
11 If we sowed spiritual things in you, is it too much if we reap material things from you? 12 If others share the right over you, do we not more? Nevertheless, we did not use this right, but we endure all things so that we will cause no hindrance to the gospel of Christ. 13 Do you not know that those who perform sacred services eat the food of the temple, and those who attend regularly to the altar have their share [g]from the altar? 14 So also the Lord directed those who proclaim the gospel to get their living from the gospel.

Carry your own load
“each one looking to yourself, so that you too will not be tempted”

Boasting in the Cross

2 Corinthians 11:22-30
22Are they Hebrews? So am I. Are they Israelites? So am I. Are they descendants of Abraham? So am I. 23Are they servants of Christ?—I speak as if insane—I more so; in far more labors, in far more imprisonments, beaten times without number, often in danger of death. 24Five times I received from the Jews thirty-nine lashes. 25Three times I was beaten with rods, once I was stoned, three times I was shipwrecked, a night and a day I have spent in the deep. 26I have been on frequent journeys, in dangers from rivers, dangers from robbers, dangers from my countrymen, dangers from the Gentiles, dangers in the city, dangers in the wilderness, dangers on the sea, dangers among false brethren;27I have been in labor and hardship, through many sleepless nights, in hunger and thirst, often without food, in cold and exposure. 28Apart from such external things, there is the daily pressure on me of concern for all the churches. 29Who is weak without my being weak? Who is led into sin without my intense concern?
30If I have to boast, I will boast of what pertains to my weakness.

Posted by Unchained Disciples at 1:58 PM