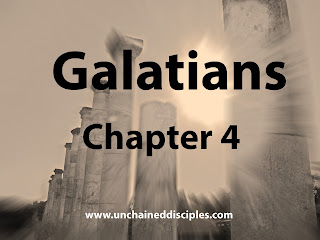 A bible study on Galatians chapter 5 and instructions on how to interpret the bible.


Scriptures:
Outline:
Children in Christ
Back to the Old Ways
Bond vs Free
Bonus: Methods of Interpreting the Bible

Galatians 4:1-7
1Now I say, as long as the heir is a child, he does not differ at all from a slave although he is owner of everything, 2but he is under guardians and managers until the date set by the father. 3So also we, while we were children, were held in bondage under the elemental things of the world. 4But when the fullness of the time came, God sent forth His Son, born of a woman, born under the Law, 5so that He might redeem those who were under the Law, that we might receive the adoption as sons. 6Because you are sons, God has sent forth the Spirit of His Son into our hearts, crying, “Abba! Father!”7Therefore you are no longer a slave, but a son; and if a son, then an heir through God.
When we have the law as our taskmaster, we view God as the Master who is keeping us in line.  He's the one who will punish us if we break the law.
Paul is telling us that we should now view God as our father.

How Do You View God?

Some people made a decision not to try to live up to the expectations of their parents
This happens in the natural and in religion
Example: preacher’s kids, Catholic school kids

Transforming Into His Image

Children with good parents often model themselves after their parents
Example: Jerome’s son
When we see God the way He truly is, we become transformed into His image
We are transforming into the image of the God that we believe is true.
When we don’t see God the way he is truly is He becomes transformed into the image of Him that we've created
That’s why the church is full of judgmental people
The closer they get to the God they have imagined the more they become like Him
We need to accept what Jesus told us about God

How We Represent God

We are supposed to represent God to the lost
We don’t minister in love because we don’t know God as a loving father
Our hearts should sing:

Back to the Old Ways

Galatians 4:8-20
8However at that time, when you did not know God, you were slaves to those which by nature are no gods. 9But now that you have come to know God, or rather to be known by God, how is it that you turn back again to the weak and worthless elemental things, to which you desire to be enslaved all over again?
10You observe days and months and seasons and years. 11I fear for you, that perhaps I have labored over you in vain.  12I beg of you, brethren, become as I am, for I also have become as you are. You have done me no wrong; 13but you know that it was because of a bodily illness that I preached the gospel to you the first time; 14and that which was a trial to you in my bodily condition you did not despise or loathe, but you received me as an angel of God, as Christ Jesus Himself. 15Where then is that sense of blessing you had? For I bear you witness that, if possible, you would have plucked out your eyes and given them to me. 16So have I become your enemy by telling you the truth? 17They eagerly seek you, not commendably, but they wish to shut you out so that you will seek them. 18But it is good always to be eagerly sought in a commendable manner, and not only when I am present with you. 19My children, with whom I am again in labor until Christ is formed in you— 20but I could wish to be present with you now and to change my tone, for I am perplexed about you.

They Worshiped Things That Were “no gods”

Before they were saved they Worshiped things that were no gods
They used to worship things that “by nature are no gods”
1 Corinthians 10:19-21
What do I mean then? That a thing sacrificed to idols is anything, or that an idol is anything?
20 No, but I say that the things which the Gentiles sacrifice, they sacrifice to demons and not to God; and I do not want you to become sharers in demons.
21 You cannot drink the cup of the Lord and the cup of demons; you cannot partake of the table of the Lord and the table of demons.
In the Greek culture, every mountain, tree, grove and and fountain has a god associated with it
They observed days, months, seasons and years
He's saying you don't need to follow the Jewish laws and customs

Do we follow wordly or cultural practices today?
Examples:

The Babylonians and many ancient cultures worshiped the sun god, Nimrod
We celebrate Christmas on that day because the Catholic Church purposely put Christmas on the same day as the existing pagan holiday
I’m not saying that you should go to work on Christmas

Paul makes his point using an allegory about Sarah and Hagar
Abraham and Sarah’s story (Gen 16; Gen 21)
Galatians 4:21-31
21Tell me, you who want to be under law, do you not listen to the law? 22For it is written that Abraham had two sons, one by the bondwoman and one by the free woman. 23But the son by the bondwoman was born according to the flesh, and the son by the free woman through the promise.24This is allegorically speaking, for these women are two covenants: one proceeding from Mount Sinai bearing children who are to be slaves; she is Hagar. 25Now this Hagar is Mount Sinai in Arabia and corresponds to the present Jerusalem, for she is in slavery with her children. 26But the Jerusalem above is free; she is our mother.
27For it is written,
“REJOICE, BARREN WOMAN WHO DOES NOT BEAR;
BREAK FORTH AND SHOUT, YOU WHO ARE NOT IN LABOR;
FOR MORE NUMEROUS ARE THE CHILDREN OF THE DESOLATE
THAN OF THE ONE WHO HAS A HUSBAND.” [Isaiah 54:1]
28And you brethren, like Isaac, are children of promise. 29But as at that time he who was born according to the flesh persecuted him who was born according to the Spirit, so it is now also.
30But what does the Scripture say?
“CAST OUT THE BONDWOMAN AND HER SON,
FOR THE SON OF THE BONDWOMAN SHALL NOT BE AN HEIR WITH THE SON OF THE FREE WOMAN.”
31So then, brethren, we are not children of a bondwoman, but of the free woman.

Hagar was Abraham's slave
Sarah was the Abraham’s wife
Paul tells us that we are not children of the bond woman.

Ishmael was born a slave
Isaac was born free

Methods of Interpreting the Bible

Both children and slaves are required to be obedient
Once we become mature, we realize that we are free from the law
Paul mentions that the Galatians kept going back to their old ways
They kept focusing on their previous life
To be real, for some it’s not because we focus on the bad things of the past
We need to remember that our good works:
We get saved when we believe that Jesus died for us
He is a loving father waiting for us to draw closer to Him
...don’t keep Him waiting

Session 5 The Bond And the Free
https://youtu.be/EwQW4xzL_vg

Cast Out The Bondwoman (Galatians 4:21-31)
https://youtu.be/rskyPiRYPoo

John 1:11-13
11 He came to His own, and those who were His own did not receive Him. 12 But as many as received Him, to them He gave the right to become children of God, even to those who believe in His name, 13 who were born, not of blood nor of the will of the flesh nor of the will of man, but of God.
Ephesians 6:1-6
1Children, obey your parents in the Lord, for this is right. 2HONOR YOUR FATHER AND MOTHER (which is the first commandment with a promise), 3SO THAT IT MAY BE WELL WITH YOU, AND THAT YOU MAY LIVE LONG ON THE EARTH.
4Fathers, do not provoke your children to anger, but bring them up in the discipline and instruction of the Lord.
5Slaves, be obedient to those who are your masters according to the flesh, with fear and trembling, in the sincerity of your heart, as to Christ; 6not by way of eyeservice, as men-pleasers, but as slaves of Christ, doing the will of God from the heart. 7With good will render service, as to the Lord, and not to men, 8knowing that whatever good thing each one does, this he will receive back from the Lord, whether slave or free.
Romans 8:12-17
12 So then, brethren, we are under obligation, not to the flesh, to live according to the flesh—13 for if you are living according to the flesh, you must die; but if by the Spirit you are putting to death the deeds of the body, you will live. 14 For all who are being led by the Spirit of God, these are sons of God. 15 For you have not received a spirit of slavery leading to fear again, but you have received a spirit of adoption as sons by which we cry out, “Abba! Father!”16 The Spirit Himself testifies with our spirit that we are children of God, 17 and if children, heirs also, heirs of God and fellow heirs with Christ, if indeed we suffer with Him so that we may also be glorified with Him.

Back to the Old Ways

They worship things there were no gods

Deuteronomy 32
"They made Him jealous with strange gods;
With abominations they provoked Him to anger.
17 "They sacrificed to demons who were not God,
To gods whom they have not known,
New gods who came lately,
Whom your fathers did not dread.
18 "You neglected the Rock who begot you,
And forgot the God who gave you birth.

Jeremiah 10:1-4
1 ¶ Hear the word which the LORD speaks to you, O house of Israel.
2 Thus says the LORD,
"Do not learn the way of the nations,
And do not be terrified by the signs of the heavens
Although the nations are terrified by them;
3 For the customs of the peoples are delusion;
Because it is wood cut from the forest,
The work of the hands of a craftsman with a cutting tool.
4 "They decorate it with silver and with gold;
They fasten it with nails and with hammers
So that it will not totter.

When we don’t follow God’s plan, we produce an Ishmael and not an Isaac
Ishmael is the father of the Muslims

Methods of Interpreting the Bible

Israelites in the Wilderness

The Israelites also wanted to go back to slavery
Posted by Unchained Disciples at 3:14 PM