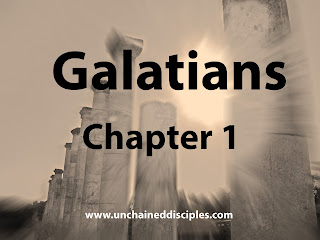 An in depth study on the first chapter of Galatians.

Galatia isn't a city.  It's a territory like the Bay Area.
Purpose of Letter
The Jews had a tradition that any non-Jews were not the chosen people

Paul wrote this letter as a:
Jewish vs Gentile Converts
To the Jews
Because the early apostles taught to the Jews, they taught that Jesus was the Messiah

The Early Apostles taught Who Jesus was

This was similar to  the teaching of John the Baptist
To the Gentiles
Paul was the apostle to the Gentiles (Acts 9:15)

Paul initially taught to Jews and in synagogues

As his ministry continued and he had mysteries revealed to him, he  taught:

Paul revealed the “mystery” that Jesus also came for the Gentiles

1 Corinthians 1:17
17 For Christ did not send me to baptize, but to preach the gospel, not in cleverness of speech, so that the cross of Christ would not be made void.

Today many of the Protestant denominational are divided based on disagreement on the requirements for salvation.

The gospel we will discuss is Paul's gospel of salvation by faith alone
Galatians 1:1-5
This chapter can be grouped:

Galatians 1:1-5
1 Paul, an apostle (not sent from men nor through the agency of man, but through Jesus Christ and God the Father, who raised Him from the dead),
2 and all the brethren who are with me, To the churches of Galatia:
3 Grace to you and peace from God our Father and the Lord Jesus Christ,
4 who gave Himself for our sins so that He might rescue us from this present evil age, according to the will of our God and Father,
5 to whom be the glory forevermore. Amen.

What does Paul say about Jesus?

How does Paul describe himself?
An Apostle
Not appointed by the other apostles

The Judaizers brought into question whether Paul was a true apostle

1 Corinthians 9:1-2
Am I not free? Am I not an apostle? Have I not seen Jesus our Lord? Are you not my work in the Lord?
2 If to others I am not an apostle, at least I am to you; for you are the seal of my apostleship in the Lord.

When the 11 remaining disciples chose a replacement for Judas they required that he:

Some say to be an apostle you must have seen Jesus

Catholics believe in the Apostolic Succession from laying of hands

There are many currently who call themselves apostles
Galatians 1:6-9
Only One Gospel
Galatians 1:6-9
6  I am amazed that you are so quickly deserting Him who called you by the grace of Christ, for a different gospel;
7 which is really not another; only there are some who are disturbing you and want to distort the gospel of Christ.
8 But even if we, or an angel from heaven, should preach to you a gospel contrary to what we have preached to you, he is to be accursed!
9 As we have said before, so I say again now, if any man is preaching to you a gospel contrary to what you received, he is to be accursed!

What is the gospel?

People were changing the gospel by adding works to it.
Grace vs The Law
Law age = works = thou shalt not and thou shall do
Church age = Faith
Remission vs Redemption

Old Testament had remission from sin

Restitution is paying off your debt

We don't get to Heaven based on your morals and ethics

You can't earn salvation; you can only receive it.

Today’s Judaizers
What does “adding to the gospel” look like today?

“Adding to the gospel” is saying that we need to do certain acts to be saved:

These are all good things that we should all do, but they are requirements to be saved

What about the need for:

They are all good sacraments, but they don’t get you into Heaven

Faith?
An Angel from Heaven
Galatians 1:8
8 But even if we, or an angel from heaven, should preach to you a gospel contrary to what we have preached to you, he is to be accursed!

Revelations claimed to be from an angel

Joseph Smith (Mormons) had a vision of angels

St Ignatius
‘He also experienced a series of visions in full daylight while at the hospital. These repetitive visions appeared as "a form in the air near him and this form gave him much consolation because it was exceedingly beautiful ... it somehow seemed to have the shape of a serpent and had many things that shone like eyes, but were not eyes. He received much delight and consolation from gazing upon this object ... but when the object vanished he became disconsolate".  He came to interpret this vision as diabolical in nature.’
--Wikipedia

All these men claimed they received the message after long periods of isolation in quiet.

Practices that  open you up to be influenced by demonic spirits:

Kundalini Spirit = false Holy Spirit
Galatians 1:10-17
Paul Was Called By God
Galatians 1:10-17
10 For am I now seeking the favor of men, or of God? Or am I striving to please men? If I were still trying to please men, I would not be a bond-servant of Christ.
11 For I would have you know, brethren, that the gospel which was preached by me is not according to man.
12 For I neither received it from man, nor was I taught it, but I received it through a revelation of Jesus Christ
13 For ye have heard of my conversation in time past in the Jewish religion, how that beyond measure I persecuted the church of God, and wasted it:
14 And profited in the Jews' religion above many my equals in mine own nation, being more exceedingly zealous of the traditions of my fathers.
15 But when it pleased God, who separated me from my mother's womb, and called me by his grace,
16 To reveal his Son in me, that I might preach him among the heathen; immediately I conferred not with flesh and blood:
17 Neither went I up to Jerusalem to them which were apostles before me; but I went into Arabia, and returned again unto Damascus.
Mysteries Revealed

God gave Paul special revelation
Covering
“Covering” is a church concept that all Christians and all Christian ministries must be submitted to some higher authority.   Among evangelicals there is a growing movement that teaches all people in the church need to be properly "covered" by God’s "delegated authority" in the church.

Paul did not consult with anyone before starting his ministry

People will always ask “who gave you the authority”

I don't believe that “covering” is a biblical requirement
Galatians 1:18-24
Galatians 1:18-24
18 Then after three years I went up to Jerusalem to see Peter, and abode with him fifteen days.
19 But other of the apostles saw I none, save James the Lord's brother.
20 Now the things which I write unto you, behold, before God, I lie not.
21 Afterwards I came into the regions of Syria and Cilicia;
22 And was unknown by face unto the churches of Judaea which were in Christ:
23 But they had heard only, That he which persecuted us in times past now preacheth the faith which once he destroyed.
24 And they glorified God in me.
Conclusion
The message that John the Baptist taught was to “repent from your sins and be baptized” because the Messiah was coming

When Paul encountered Jesus, Jesus told Paul that he was to minister to the Gentiles

Paul said if anyone preaches another gospel let them be accursed.

This is the good news that we preach...that God so loved the world that He gave His only begotten son and that all we need to do is believe on Him to be saved.

The Dangers of False Teaching - #2 - Galatians for Beginners
https://youtu.be/teO3i6KmbeU

Extra
Ephesians 2:14
14 For He Himself is our peace, who made both groups into one and broke down the barrier of the dividing wall,
15 by abolishing in His flesh the enmity, which is the Law of commandments contained in ordinances, so that in Himself He might make the two into one new man, thus establishing peace,
16 and might reconcile them both in one body to God through the cross, by it having put to death the enmity.

An Apostle
Not appointed by the other apostles

Apostleship gives you authority to speak on behalf of Jesus

Some say to be an apostle you must have seen Jesus

This is the text to support…

Acts 1:21-26
21 "Therefore it is necessary that of the men who have accompanied us all the time that the Lord Jesus went in and out among us—
22 beginning with the baptism of John until the day that He was taken up from us—one of these must become a witness with us of His resurrection."
23 So they put forward two men, Joseph called Barsabbas (who was also called Justus), and Matthias.
24 And they prayed and said, "You, Lord, who know the hearts of all men, show which one of these two You have chosen
25 to occupy this ministry and apostleship from which Judas turned aside to go to his own place."
26 And they drew lots for them, and the lot fell to Matthias; and he was added to the eleven apostles.

1 Cor 9:1-2
¶ Am I not free? Am I not an apostle? Have I not seen Jesus our Lord? Are you not my work in the Lord?
2 If to others I am not an apostle, at least I am to you; for you are the seal of my apostleship in the Lord.

2 Cor 11:3-4;13-15
But I am afraid that, as the serpent deceived Eve by his craftiness, your minds will be led astray from the simplicity and purity of devotion to Christ.
4 For if one comes and preaches another Jesus whom we have not preached, or you receive a different spirit which you have not received, or a different gospel which you have not accepted, you bear this beautifully.
…
13 For such men are false apostles, deceitful workers, disguising themselves as apostles of Christ.
14 No wonder, for even Satan disguises himself as an angel of light.
15 Therefore it is not surprising if his servants also disguise themselves as servants of righteousness, whose end will be according to their deeds.

Judge the messenger by the message

A Different Spirit (Kundalini)
A different manifestation of the Holy Spirit

The Kundalini Spirit is a fake Holy Spirit

The following are either common signs of an awakened Kundalini or symptoms of a problem associated with an awakening Kundalini:
--Wikipedia (Kundalini)


Posted by Unchained Disciples at 12:26 AM