Analysis of the Prosperity Doctrine 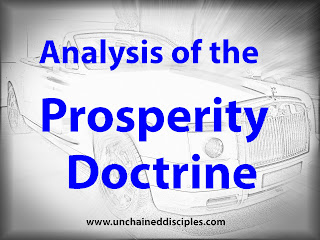 We examine the Prosperity Doctrine and the teachings of the Word of Faith denomination to determine if they are accurate and examine why it they have become so popular.


2 Timothy 4:3-4
3For the time will come when they will not endure sound doctrine; but wanting to have their ears tickled, they will accumulate for themselves teachers in accordance to their own desires, 4and will turn away their ears from the truth and will turn aside to myths.


Prosperity theology (sometimes referred to as the prosperity gospel, the health and wealth gospel, the gospel of success) is a religious belief among some Christians, who hold that financial blessing and physical well-being are always the will of God for them, and that faith, positive speech, and donations to religious causes will increase one's material wealth. Prosperity theology views the Bible as a contract between God and humans: if humans have faith in God, God will deliver security and prosperity.

According to historians, the prosperity gospel was formed from the intersection of three different ideologies: Pentecostalism, New Thought, and the American ideals of pragmatism, individualism, and upward mobility.

The New Thought movement is a philosophical movement which developed in the United States in the 1880s that holds that Infinite Intelligence, or God, is everywhere, spirit is the totality of real things, true human selfhood is divine, divine thought is a force for good, sickness originates in the mind, and "right thinking" has a healing effect  Followers of this movement shared beliefs concerning: metaphysics, positive thinking, the law of attraction, healing, life force, creative visualization, and personal power.


New thought doctrine introduced the philosophy that if you wish for something hard enough you would get it.  The New Thought movement was responsible for popularizing belief in the power of the mind to achieve prosperity. By the 20th century, New Thought concepts had saturated American popular culture, being common features of both self-help literature and popular psychology.

E. W. Kenyon, a Baptist minister is credited with introducing New Thought teachings into early Pentecostalism after being exposed to  it in college. He taught that Christ's substitutionary atonement secured for believers a right to divine healing. This was attained through positive, faith-filled speech.  He claimed that the spoken word of God allowed believers to appropriate the same spiritual power that God used to create the world and attain the provisions promised in Christ's death and resurrection. Prayer was understood to be a binding, legal act and he taught believers to demand healing since they were already legally entitled to receive it.


By the 1940s and 1950s, a recognizable form of the doctrine began to take shape within the Pentecostal movement through the teachings of deliverance and healing evangelists.

Although nearly all of the healing evangelists of the 1940s and '50s taught that faith could bring financial rewards, a new prosperity-oriented teaching developed in the 1970s that differed from the one taught by Pentecostal evangelists of the 1950s. This "Positive Confession" or "Word of Faith" movement taught that a Christian with faith can speak into existence anything consistent with the will of God.
By 2006, three of the four largest congregations in the United States were teaching prosperity theology.  A 2006 poll by Time reported that 17 percent of Christians in America said they identified with the movement.


6 of these are on the list of America’s top 10 richest preachers.


Many of the teachings of the prosperity doctrine have become woven into mainstream Christian doctrine.

The teaching is often based on non-traditional interpretations of Bible verses.  Many of the interpretations can only be drawn if you take the verse out of its biblical context.


Example: “I don’t think I want to go to the party because I’m sick.”


Let’s look at some of the doctrines taught by some of the prominent leaders of the movement.

“In 2014...All you’ve lost will be restored. Guaranteed!
All the enemy has taken from you is coming back double. Guaranteed!”
“All you have to do is release your faith”
…
“The Word of God promises that only the giver is favored with His blessing”


“So today, sow your seed for spreading the Gospel of Jesus Christ with explosive faith.”
--BennyHinn.org

Matthew 13:3-9
3Then he told them many things in parables, saying: “A farmer went out to sow his seed. 4As he was scattering the seed, some fell along the path, and the birds came and ate it up. 5Some fell on rocky places, where it did not have much soil. It sprang up quickly, because the soil was shallow. 6But when the sun came up, the plants were scorched, and they withered because they had no root. 7Other seed fell among thorns, which grew up and choked the plants. 8Still other seed fell on good soil, where it produced a crop—a hundred, sixty or thirty times what was sown. 9Whoever has ears, let them hear.”

Matthew 13:18-23
18“Listen then to what the parable of the sower means: 19When anyone hears the message about the kingdom and does not understand it, the evil one comes and snatches away what was sown in their heart. This is the seed sown along the path. 20The seed falling on rocky ground refers to someone who hears the word and at once receives it with joy. 21But since they have no root, they last only a short time. When trouble or persecution comes because of the word, they quickly fall away. 22The seed falling among the thorns refers to someone who hears the word, but the worries of this life and the deceitfulness of wealth choke the word, making it unfruitful. 23But the seed falling on good soil refers to someone who hears the word and understands it. This is the one who produces a crop, yielding a hundred, sixty or thirty times what was sown.”

If you speak something it will come into being.  A believer may claim whatever they desire from God, simply by speaking it.  If you speak to your problem (health issue, finance issue, etc.) God will create what you’re speaking


The Bible has promised prosperity for believers, so positive confession means that believers are speaking in faith what God has already spoken about them.


Christians have been given power over creation because they are made in the image of God and positive confession allows Christians to exercise dominion over their souls and material objects around them.

Proverbs 18:21a
The Power of Life and Death is in our tongue

Proverbs 18:19-21
19A brother offended is harder to be won than a strong city,
And contentions are like the bars of a citadel.
20With the fruit of a man’s mouth his stomach will be satisfied;
He will be satisfied with the product of his lips.
21Death and life are in the power of the tongue,
And those who love it will eat its fruit.

God Guarantees to be Healthy and Wealthy

Every Christian is entitled to health, wealth and prosperity because it is God’s will. If you have faith you will be materially wealthy and you will be in good health.  Jesus’ death already made you wealthy and healthy you just need to activate it with faith.

3 John 1:2
2Beloved, I pray that in all respects you may prosper and be in good health, just as your soul prospers.

3 John 1:1-3
1The elder to the beloved Gaius, whom I love in truth.   2Beloved, I pray that in all respects you may prosper and be in good health, just as your soul prospers. 3For I was very glad when brethren came and testified to your truth, that is, how you are walking in truth.


He says “I pray” you prosper and be in good health


Problem
A focus on material possessions even though that wasn’t Jesus’ focus.


It leads to the conclusion that:
If you’re not rich or you’re sick then either:


What can be wrong with you?

Faith is a Substance

Faith is a spiritual force. Like gravity and electricity are natural sources.


God is not the object of your faith

Hebrews 11:1 (NASB)
1Now faith is the assurance of things hoped for, the conviction of things not seen.


hupostasis
(a) confidence, assurance, (b) a giving substance (or reality) to, or a guaranteeing, (c) substance, reality.


The problem:
If we are saved by “faith” and faith is a substance how does Jesus fit into the equation.  It replaces Jesus with “a force” that saves us.

Why Is the Doctrine Appealing?

Come to Jesus because:

Deep down many Christians think that if bad things are happening to me or if I'm not getting the things in life that I want and maybe it's because:


This is the same theology that  Job’s friends blamed Job with.

Many people believe that if I’m good for God, God will be good to my wallet

Gives You Control Over Your Circumstances


They draw the motivated and determined individuals


Recession proof up to a point


This is the “best scheme” some people have seen


Is physical healing provided for by Christ’s death on the cross?


The answer to both questions is ...yes!


They are actually correct that Jesus’ death:


But these blessings of the atonement are promised to be realized in heaven.


They have what theologians call an “over-realized eschatology”


They have taken two elements that are promised in Heaven and claim them as being realized here on earth:


Philippians 1:15-18
15Some, to be sure, are preaching Christ even from envy and strife, but some also from good will; 16the latter do it out of love, knowing that I am appointed for the defense of the gospel; 17the former proclaim Christ out of selfish ambition rather than from pure motives, thinking to cause me distress in my imprisonment. 18What then? Only that in every way, whether in pretense or in truth, Christ is proclaimed; and in this I rejoice.

Posted by Unchained Disciples at 11:08 PM