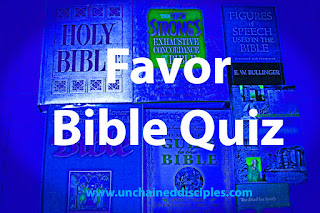 The second 10 question quiz based on the series on Favor.

1. When Jacob told Laban he wanted to leave, what reason did Laban give for wanting Jacob to stay?

Answer: B -  Laban thought that the Lord had blessed him because of Jacob

Genesis 30:2727 But Laban said to him, "If now it pleases you, stay with me; I have divined that the LORD has blessed me on your account."

2. Joseph's time in jail wasn't as bad as it could have been because

Answer: E - All of the above

Genesis 39:20-2320 So Joseph's master took him and put him into the jail, the place where the king's prisoners were confined; and he was there in the jail.21 But the LORD was with Joseph and extended kindness to him, and gave him favor in the sight of the chief jailer.22 The chief jailer committed to Joseph's charge all the prisoners who were in the jail; so that whatever was done there, he was responsible for it.23 The chief jailer did not supervise anything under Joseph's charge because the LORD was with him; and whatever he did, the LORD made to prosper.
From the lesson: Sharing Other People's Favor

3. Who did God say will be faithful when given many things.

Answer: C - Someone who is faithful with little

4. Who increased in the favor of both God and man?

Answer: B - Jesus and Samuel

1 Samuel 2:26
26Now the boy Samuel was growing in stature and in favor both with the LORD and with men.

Luke 2:52
52 And Jesus kept increasing in wisdom and stature, and in favor with God and men.

5. ‘A thing conducive to happiness or welfare’ is the definition of:

6. Which of these expressions is true?

Answer: D - All of the above

7. Which of the following is true about grace?

Answer: C - Grace is what keeps you saved

You can’t do anything to “earn” grace,

8. What term did we use to refer to the fact that God can do good things for bad people who don’t deserve it.

Matthew 5:45
44 "But I say to you, love your enemies and pray for those who persecute you,45 so that you may be sons of your Father who is in heaven; for He causes His sun to rise on the evil and the good, and sends rain on the righteous and the unrighteous.

9. Which of these things did we not discuss as a result of favor?

10. Which of these was a term that meant to have the favor of God

Answer: B - Having the face of God (shine upon you)

Ezekiel 39:23-24
23“The nations will know that the house of Israel went into exile for their iniquity because they acted treacherously against Me, and I hid My face from them; so I gave them into the hand of their adversaries, and all of them fell by the sword. 24“According to their uncleanness and according to their transgressions I dealt with them, and I hid My face from them.”’”

Posted by Unchained Disciples at 12:40 AM