The Results of Favor 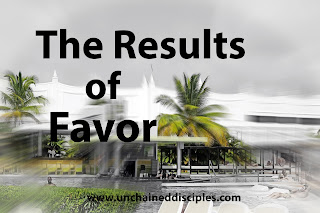 In this study we look at 10 results you get when you have the Favor of God.

Review of Blessed and Highly Favored

The results of favor…

When a person is chosen by God for the position that other men don't see him as qualified for.


1 Samuel 16: 10-12
10 Thus Jesse made seven of his sons pass before Samuel. But Samuel said to Jesse, "The LORD has not chosen these."11 And Samuel said to Jesse, "Are these all the children?" And he said, "There remains yet the youngest, and behold, he is tending the sheep." Then Samuel said to Jesse, "Send and bring him; for we will not sit down until he comes here."12 So he sent and brought him in. Now he was ruddy, with beautiful eyes and a handsome appearance. And the LORD said, "Arise, anoint him; for this is he."


The Jews favored the oldest child, but God chose:

Psalms 5:12For You; O Jehovah, will bless the righteous; with favor You will surround him as with a shield.


While Israel followed God's commands, they had God's protection from their enemies.


Ezekiel 39:23-24
23“The nations will know that the house of Israel went into exile for their iniquity because they acted treacherously against Me, and I hid My face from them; so I gave them into the hand of their adversaries, and all of them fell by the sword. 24“According to their uncleanness and according to their transgressions I dealt with them, and I hid My face from them.”’”


To “have God’s face” is to have His favor

God Is With You

We saw in the story of Joseph that “God was with” Joseph when he was in jail.


Genesis 39:20-21
20So Joseph’s master took him and put him into the jail, the place where the king’s prisoners were confined; and he was there in the jail. 21But the LORD was with Joseph and extended kindness to him, and gave him favor in the sight of the chief jailer.


What does “God is With You” really mean?


Psalms 23:4
4Even though I walk through the valley of the shadow of death,
I fear no evil, for You are with me;
Your rod and Your staff, they comfort me.


Example: child afraid to take the trash out at night


You are not alone

Judges 6:16-17
But the LORD said to him, "Surely I will be with you, and you shall defeat Midian as one man."17 So Gideon said to Him, "If now I have found favor in Your sight, then show me a sign that it is You who speak with me.


Exodus 14:13-14
13 But Moses said to the people, “Do not fear! Stand by and see the salvation of the Lord which He will accomplish for you today; for the Egyptians whom you have seen today, you will never see them again forever. 14 The Lord will fight for you while you keep silent.”


When God is with you, nothing is impossible


This assumes you’re walking in the path that God has directed.

A Relationship With God

When a man seeks the face of God in Prayer, and has all his request granted.

Exodus 33:11
11Thus the LORD used to speak to Moses face to face, just as a man speaks to his friend. When Moses returned to the camp, his servant Joshua, the son of Nun, a young man, would not depart from the tent.


3 Levels of communication with God:


Numbers 12:8
With him I speak mouth to mouth, Even openly, and not in dark sayings, And he beholds the form of the LORD. Why then were you not afraid To speak against My servant, against Moses?"


In Exodus 32 [9-13] Moses changed God’s mind about destroying the people after they made the golden calf
Exodus 32:9-12;14
9 The Lord said to Moses, “I have seen this people, and behold, they are  an obstinate people. 10 Now then let Me alone, that My anger may burn against them and that I may destroy them; and I will make of you a great nation.”
11 Then Moses entreated the Lord his God, and said, “O Lord, why does Your anger burn against Your people whom You have brought out from the land of Egypt with great power and with a mighty hand?
...
” 14 So the Lord changed His mind about the harm which He said He would do to His people.


We saw others who influenced God

Others Notice Your Favor

Other people can see the presence of the Lord on you


Genesis 39:2-3
2 The LORD was with Joseph, so he became a successful man. And he was in the house of his master, the Egyptian.3 Now his master saw that the LORD was with him and how the LORD caused all that he did to prosper in his hand.


Genesis 41:37-38
37The plan seemed good to Pharaoh and to all his officials. 38So Pharaoh asked them, “Can we find anyone like this man, one in whom is the spirit of God [elohim]?”


How might people respond when they notice the favor of God on you?

Supernatural influence on other’s opinion of you
When a man is always receiving favor from others as a result of God’s hand on his life.

The Egyptians Favor the Israelites

Exodus 12:35-38
35Now the sons of Israel had done according to the word of Moses, for they had requested from the Egyptians articles of silver and articles of gold, and clothing; 36and the LORD had given the people favor in the sight of the Egyptians, so that they let them have their request. Thus they plundered the Egyptians.37Now the sons of Israel journeyed from Rameses to Succoth, about six hundred thousand men on foot, aside from children. 38A mixed multitude also went up with them, along with flocks and herds, a very large number of livestock.


They went from being slaves to being a wealthy nation in a single day.


Favor can expedite your advancement.

When a man  takes little effort, that lead to great achievement.


Genesis 39:23
23 The chief jailer did not supervise anything under Joseph's charge because the LORD was with him; and whatever he did, the LORD made to prosper.


What does prosper mean?


It means whatever (good) you set your hands to will prosper.


You can’t assume that you know God’s plan

Genesis 37:3-4
3Now Israel loved Joseph more than all his sons, because he was the son of his old age; and he made him a varicolored tunic. 4His brothers saw that their father loved him more than all his brothers; and so they hated him and could not speak to him on friendly terms.


Favor and prosperity increase the insecurities of those around you


Others will notice God’s favor on you


Favor makes whatever you put your hands to do become fruitful


Your favor may be in:


Whatever area you are receiving favor, it’s not to benefit just you

Ezekiel 39:28-29
28“Then they will know that I am the LORD their God because I made them go into exile among the nations, and then gathered them again to their own land; and I will leave none of them there any longer. 29“I will not hide My face from them any longer, for I will have poured out My Spirit on the house of Israel,” declares the Lord GOD.

The Gentile nations knew the Jews were favored by God

God is With You

Was the presence of God with Mary?


1 Samuel 16:13
13Then Samuel took the horn of oil and anointed him in the midst of his brothers; and the Spirit of the LORD came mightily upon David from that day forward. And Samuel arose and went to Ramah.

Judges 6:15-18
15“Pardon me, my lord,” Gideon replied, “but how can I save Israel? My clan is the weakest in Manasseh, and I am the least in my family.”
16The Lord answered, “I will be with you, and you will strike down all the Midianites, leaving none alive.”
17Gideon replied, “If now I have found favor in your eyes, give me a sign that it is really you talking to me. 18Please do not go away until I come back and bring my offering and set it before you.”
And the Lord said, “I will wait until you return.”

Esther 2: 15-17
15Now when the turn of Esther, the daughter of Abihail the uncle of Mordecai who had taken her as his daughter, came to go in to the king, she did not request anything except what Hegai, the king’s eunuch who was in charge of the women, advised. And Esther found favor in the eyes of all who saw her. 16So Esther was taken to King Ahasuerus to his royal palace in the tenth month which is the month Tebeth, in the seventh year of his reign.


Daniel 1:9-10
Now God granted Daniel favor and compassion in the sight of the commander of the officials,10 and the commander of the officials said to Daniel, "I am afraid of my lord the king, who has appointed your food and your drink; for why should he see your faces looking more haggard than the youths who are your own age? Then you would make me forfeit my head to the king."

1 Chron 4: 9-10
9Jabez was more honorable than his brothers. His mother had named him Jabez,c saying, “I gave birth to him in pain.” 10Jabez cried out to the God of Israel, “Oh, that you would bless me and enlarge my territory! Let your hand be with me, and keep me from harm so that I will be free from pain.” And God granted his request.

The Favored Can Influence God

Jeremiah 26:18-19
18 "Micah of Moresheth prophesied in the days of Hezekiah king of Judah; and he spoke to all the people of Judah, saying, 'Thus the LORD of hosts has said, "Zion will be plowed as a field, And Jerusalem will become ruins, And the mountain of the house as the high places of a forest."'19 "Did Hezekiah king of Judah and all Judah put him to death? Did he not fear the LORD and entreat the favor [face - paneh] of the LORD, and the LORD changed His mind about the misfortune which He had pronounced against them? But we are committing a great evil against ourselves."

1 Peter 3:13-14
Who is there to harm you if you prove zealous for what is good?14 But even if you should suffer for the sake of righteousness, you are blessed. AND DO NOT FEAR THEIR INTIMIDATION, AND DO NOT BE TROUBLED,


Prosperity With a Purpose - Bill Johnson

Posted by Unchained Disciples at 10:58 PM