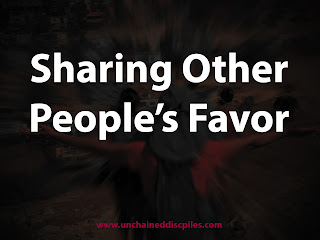 
Is this just folklore?
Is there any biblical truth to this?


Can we bring blessings or curses on others just based on our presence?

How would people treat you if they knew treating you good would benefit them?

Curse Those Who Curse You

How would people treat you if they knew it could cause them to be cursed from God?

Review of Who Does God Favor - Part 2


This favor was from Jacob.


Favor can cause jealousy, envy, and hostility towards you

Genesis 39:1-6
1Now Joseph had been taken down to Egypt. Potiphar, an Egyptian who was one of Pharaoh’s officials, the captain of the guard, bought him from the Ishmaelites who had taken him there.
2The Lord was with Joseph so that he prospered, and he lived in the house of his Egyptian master.
3When his master saw that the Lord was with him and that the Lord gave him success in everything he did, 4Joseph found favor in his eyes and became his attendant. Potiphar put him in charge of his household, and he entrusted to his care everything he owned.
5From the time he put him in charge of his household and of all that he owned, the Lord blessed the household of the Egyptian because of Joseph. The blessing of the Lord was on everything Potiphar had, both in the house and in the field. 6So Potiphar left everything he had in Joseph’s care; with Joseph in charge, he did not concern himself with anything except the food he ate.


Why did Potiphar put Joseph in charge?

The Source of Your Favor

You want to make a point to identify the source of your favor.


example: Laban recognized that Jacob brought him the favor of God


Genesis 30:27
27 But Laban said to him, "If now it pleases you, stay with me; I have divined that the LORD has blessed me on your account."


Joseph had direct favor from God


The Test of Purity

Joseph passed his test
Psalm 105:17-19
17 He sent a man before them, Joseph, who was sold as a slave.18 They afflicted his feet with fetters, He himself was laid in irons;19 Until the time that his word came to pass, The word of the LORD tested him.

Genesis 39:20-23
20 So Joseph's master took him and put him into the jail, the place where the king's prisoners were confined; and he was there in the jail.
21 But the LORD was with Joseph and extended kindness to him, and gave him favor in the sight of the chief jailer.
22 The chief jailer committed to Joseph's charge all the prisoners who were in the jail; so that whatever was done there, he was responsible for it.23 The chief jailer did not supervise anything under Joseph's charge because the LORD was with him; and whatever he did, the LORD made to prosper.

The Presence of God

Joseph was in jail...how is this favor?


The favor of God comes with His presence


Even though Joseph was faithful he still suffered injustice


What Joseph didn’t lose was the presence of the Lord

Joseph’s Favor in the Palace

Genesis 41:37-42
37The plan seemed good to Pharaoh and to all his officials. 38So Pharaoh asked them, “Can we find anyone like this man, one in whom is the spirit of God [elohim]?”
39Then Pharaoh said to Joseph, “Since God has made all this known to you, there is no one so discerning and wise as you. 40You shall be in charge of my palace, and all my people are to submit to your orders. Only with respect to the throne will I be greater than you.”
41So Pharaoh said to Joseph, “I hereby put you in charge of the whole land of Egypt.” 42Then Pharaoh took his signet ring from his finger and put it on Joseph’s finger. He dressed him in robes of fine linen and put a gold chain around his neck.


The Test of Prosperity / Authority

Joseph passed the test of prosperity

How do you handle the resources of your employer

Are you passing your test of prosperity?


True favor from God is not measured by your worldly prosperity


Potiphar, the chief jailer, and Pharaoh all noticed the presence of the Lord on Joseph


If you have favor from God...those who you show you favor to will have the favor of God


This is a similar to grace


So just as we receive eternal life based on the acts of Jesus, others can receive favor based upon our actions


Genesis 6 :7-9
7The LORD said, “I will blot out man whom I have created from the face of the land, from man to animals to creeping things and to birds of the sky; for I am sorry that I have made them.” 8But Noah found favor in the eyes of the LORD.       9These are the records of the generations of Noah. Noah was a righteous man, blameless in his time; Noah walked with God.


They were allowed to live because they were related to Noah.

Joseph: The favor of God in unfavorable times
– – crossroads.tv


Barnes notes on the Bible for Genesis 41:42

Acts 7:9-10
9 "The patriarchs became jealous of Joseph and sold him into Egypt. Yet God was with him,
10 and rescued him from all his afflictions, and granted him favor and wisdom in the sight of Pharaoh, king of Egypt, and he made him governor over Egypt and all his household.

Joseph’s favor corresponds with his other gifts and talents


Does God still speak through dreams?

Exodus 23:20-22
20“Behold, I am going to send an angel before you to guard you along the way and to bring you into the place which I have prepared. 21“Be on your guard before him and obey his voice; do not be rebellious toward him, for he will not pardon your transgression, since My name is in him. 22“But if you truly obey his voice and do all that I say, then I will be an enemy to your enemies and an adversary to your adversaries.

Job 1:9-10
9“Does Job fear God for nothing?” Satan replied. 10“Have you not put a hedge around him and his household and everything he has? You have blessed the work of his hands, so that his flocks and herds are spread throughout the land.

Pharaoh Noticed the Presence of God

38So Pharaoh asked them, “Can we find anyone like this man, one in whom is the spirit of God [elohim]?”


Pharaoh saw the presence of God on Joseph


God got the glory for Joseph’s talents


If God gives you your miracle how much glory will He get?
Posted by Unchained Disciples at 7:43 PM