Who Does God Favor? 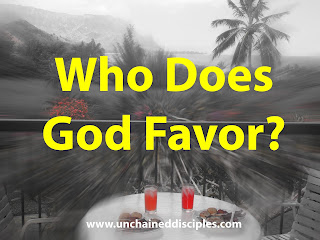 In this lesson we look at 7 things the bible says bring on the favor of God.


The favor of God can be described as “tangible evidence that a person has the approval of the Lord.”

This doesn't mean that everyone who is prosperous or healthy has found favor with God.


Are all Christians favored?  Can non-Christians be favored?

What is the benefit of being favored?

Proverbs 22:1
1 A good name is to be more desired than great wealth, Favor is better than silver and gold.

What’s better on a job interview: favor or experience?

We will look at 7 ways to gain favor from God...
Righteousness is being in good moral standing...behaving morally.

Psalms 37:16-17
16 Better is the little of the righteous Than the abundance of many wicked.17 For the arms of the wicked will be broken, But the LORD sustains the righteous.

Psalms 5:12
12 For it is You who blesses the righteous man, O LORD, You surround him with favor as with a shield.

The righteousness get favor from God.

Romans 4:5-8
But to the one who does not work, but believes in Him who justifies the ungodly, his faith is credited as righteousness,6 just as David also speaks of the blessing on the man to whom God credits righteousness apart from works:7 "BLESSED ARE THOSE WHOSE LAWLESS DEEDS HAVE BEEN FORGIVEN, AND WHOSE SINS HAVE BEEN COVERED.8 "BLESSED IS THE MAN WHOSE SIN THE LORD WILL NOT TAKE INTO ACCOUNT."


Example: buying a car- your job is your credit


Who are the righteous?


You can be positionally righteous and have a strained relationship with God because of sin.

Example: son that hasn't taken out the trash

It's not a requirement to be a Christian to have favor.

These 7 characteristics that bring God’s favor are for Christians and non-Christians alike.


Proverbs 11:27
27 Whoever seeks good finds favor,
but evil comes to one who searches for it.

If you want bad things to happen to people then evil will come to you.

Proverbs 12:2
A good man will obtain favor from the LORD, But He will condemn a man who devises evil.


Example: two nephews or nieces who:

Why did Moses want favor?


If I have found favor

Isaiah 66:2
2Has not my hand made all these things,
and so they came into being?”
declares the Lord.
“These are the ones I look on with favor:
those who are humble and contrite in spirit,
and who tremble at my word.

Trembling at God’s word is to see them as holy

If you think you know better than God then you won’t receive favor.

Those who view God’s ways as better, wiser, and more important than their own will receive favor.

Proverbs 3:3-4
3Let love and faithfulness never leave you;
bind them around your neck,
write them on the tablet of your heart.
4Then you will win favor and a good name
in the sight of God and man.

The pulpit commentary describes it as:


Proverbs 18:22
22He who finds a wife finds a good thing
And obtains favor from the LORD.


There are many places where the bible warns of negative consequences from obtaining a bad wife.


Malachi 2:11-13
11 Judah has been unfaithful. A detestable thing has been committed in Israel and in Jerusalem: Judah has desecrated the sanctuary the Lord loves by marrying women who worship a foreign god. 12 As for the man who does this, whoever he may be, may the Lord remove him from the tents of Jacob —even though he brings an offering to the Lord Almighty. 13 Another thing you do: You flood the Lord’s altar with tears. You weep and wail because he no longer looks with favor on your offerings or accepts them with pleasure from your hands.

We saw last week that God was going to kill the Israelites for worshiping a foreign God.

Being married brings God’s favor, but we see that there are exceptions based upon the person you marry.

We see that the favor of God is brought on by:

If we want favor we should:

Pray that your desire is no longer to pray for favor for yourself.

What is the favor of God, and how can I get it?


Favor--Walking In The Favor Of The Lord - Part 1


Proverbs 14:9
9Fools mock at sin,
But among the upright there is good will [favor].

Philippians 3:8-9
8 More than that, I count all things to be loss in view of the surpassing value of knowing Christ Jesus my Lord, for whom I have suffered the loss of all things, and count them but rubbish so that I may gain Christ,9 and may be found in Him, not having a righteousness of my own derived from the Law, but that which is through faith in Christ, the righteousness which comes from God on the basis of faith

Posted by Unchained Disciples at 2:29 AM