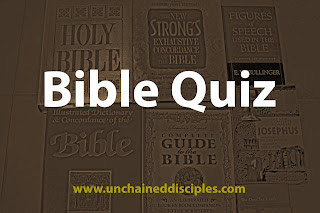 Test your bible knowledge with this quiz based our series The Untold Bible Story.

1. Why did God destroy the Tower of Babel?

Genesis 11:5-9
5The LORD came down to see the city and the tower which the sons of men had built. 6The LORD said, “Behold, they are one people, and they all have the same language. And this is what they began to do, and now nothing which they purpose to do will be impossible for them. 7“Come, let Us go down and there confuse their language, so that they will not understand one another’s speech.” 8So the LORD scattered them abroad from there over the face of the whole earth; and they stopped building the city. 9Therefore its name was called Babel, because there the LORD confused the language of the whole earth; and from there the LORD scattered them abroad over the face of the whole earth.

Answer: He didn’t, they stopped building it after he confused the language.

From the study: Tower of Babel


2. What kind of creature could the serpent in the Garden of Eden have been?

Numbers 21:9
So Moses made a bronze snake [ seraph] and put it up on a pole. Then when anyone was bitten by a snake and looked at the bronze snake, they lived.

From the studies: The Serpent and Seraphim


3. Why did Pharaoh refuse to let the children of Israel go?

Exodus 4:21
21The LORD said to Moses, “When you go back to Egypt see that you perform before Pharaoh all the wonders which I have put in your power; but I will harden his heart so that he will not let the people go.

Answer: Because God hardened his heart

From the Study: The Jews: Sons of God

4. When pagans offer sacrifices to idols what were they worshiping?

1 Corintians 10:18-21
18Consider the people of Israel: Do not those who eat the sacrifices participate in the altar? 19Do I mean then that food sacrificed to an idol is anything, or that an idol is anything? 20No, but the sacrifices of pagans are offered to demons, not to God, and I do not want you to be participants with demons. 21You cannot drink the cup of the Lord and the cup of demons too; you cannot have a part in both the Lord’s table and the table of demons.

From the study: Elohim

5.  What king built the Tower of Babel?

From the study: Tower of Babel

6. Which of the following were giants in the bible?

Answer: All of the above

From the study: Giants In The Bible

7. What type of structure do archeologist presume the Tower of Babel must have been?

Ziggurats were massive structures built in the ancient Mesopotamian valley and western Iranian plateau, having the form of a terraced step pyramid of successively receding stories or levels.
...
The Mesopotamian ziggurats were not places for public worship or ceremonies. They were believed to be dwelling places for the gods and each city had its own patron god. Only priests were permitted on the ziggurat or in the rooms at its base, and it was their responsibility to care for the gods and attend to their needs..”
…
An example of an extensive and massive ziggurat is the Marduk* ziggurat, or Etemenanki**, of ancient Babylon.
--Wikipedia

From the study: Tower of Babel
8. Who was the tallest giant of which the bible tells us his height?

Deuteronomy 3:11
11 (For only Og king of Bashan was left of the remnant of the Rephaim. Behold, his bedstead was an iron bedstead; it is in Rabbah of the sons of Ammon. Its length was nine cubits and its width four cubits by ordinary cubit.)

From the study: Giants In The Bible

9. One of the giants that David’s men fought had:

2 Samuel 21:20
20In still another battle, which took place at Gath, there was a huge man with six fingers on each hand and six toes on each foot—twenty-four in all. He also was descended from Rapha

Answer: 6 toes on each foot

From the study: Giants In The Bible
10. Who built the first city?

Genesis 4:17
17Cain had relations with his wife and she conceived, and gave birth to Enoch; and he built a city, and called the name of the city Enoch, after the name of his son.

From the study: Mystery Religion of Babylon

Bonus Question
11. What kind of car did the apostles drive?

Acts 1:14 (ESV)*
All these with one accord were devoting themselves to prayer, together with the women and Mary the mother of Jesus, and his brothers.

Answer: Honda  (they had one Accord - lol)
Posted by Unchained Disciples at 11:55 PM