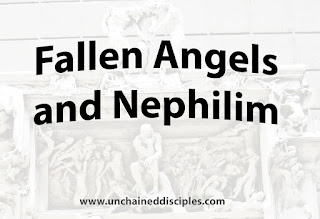 In this study, we look at the Genesis 6 account of the "sons of God" marrying the "daughters of man".  Who are these sons of God?   Are they the fallen angels?   Are the Nephilim the giant offspring of an angel and human sexual encounter?


Sons of God and Daughters of Men

Genesis 6: 1-8
1When human beings began to increase in number on the earth and daughters were born to them, 2the sons of God [bene Elohim] saw that the daughters of humans were beautiful, and they married any of them they chose. 3Then the Lord said, “My Spirit will not contend witha humans forever, for they are mortalb ; their days will be a hundred and twenty years.”
4The Nephilim were on the earth in those days—and also afterward—when the sons of God went to the daughters of humans and had children by them. They were the heroes of old, men of renown.
5The Lord saw how great the wickedness of the human race had become on the earth, and that every inclination of the thoughts of the human heart was only evil all the time. 6The Lord regretted that he had made human beings on the earth, and his heart was deeply troubled. 7So the Lord said, “I will wipe from the face of the earth the human race I have created—and with them the animals, the birds and the creatures that move along the ground—for I regret that I have made them.” 8But Noah found favor in the eyes of the Lord.

Who Were the Sons of God?

Argument Against The Fallen Angels View

Luke 20:34-36
34 Jesus replied, “The people of this age marry and are given in marriage. 35 But those who are considered worthy of taking part in the age to come and in the resurrection from the dead will neither marry nor be given in marriage, 36 and they can no longer die; for they are like the angels. They are God’s children, since they are children of the resurrection.

What about this one…


Luke 1:34-35
34“How will this be,” Mary asked the angel, “since I am a virgin?”
35The angel answered, “The Holy Spirit will come on you, and the power of the Most High will overshadow you. So the holy one to be born will be called the Son of God.


The Sons of God are in bondage, but not the Nephilim.  The spirit half of the Nephilim became what we call demons.

Jewish historian Flavius Josephus wrote:
"For many angels of God coupled with women, and begat sons that proved unjust, and despisers of all that was good, on account of the confidence they had in their own strength; for the tradition is, that these men did what resembled the acts of those whom the Grecians call giants."

(Second Temple Judaism)
The ancient Jews held the opinion that the “sons of God” were angelic beings.

Job 1:6-7
6One day the angels [ bene Elohim] came to present themselves before the Lord, and Satanb also came with them. 7The Lord said to Satan, “Where have you come from?”
Satan answered the Lord, “From roaming throughout the earth, going back and forth on it.”


Job 38:4-7
4“Where were you when I laid the earth’s foundation?
Tell me, if you understand.
5Who marked off its dimensions? Surely you know!
Who stretched a measuring line across it?
6On what were its footings set,
or who laid its cornerstone—
7while the morning stars sang together
and all the angels [bene Elohim]shouted for joy?

2 Peter 2:4-5
4 For if God did not spare angels when they sinned, but sent them to hell,[a] putting them in chains of darkness[b] to be held for judgment; 5 if he did not spare the ancient world when he brought the flood on its ungodly people, but protected Noah, a preacher of righteousness, and seven others;

Jude 1:6-7
6And the angels who did not keep their positions of authority but abandoned their proper dwelling—these he has kept in darkness, bound with everlasting chains for judgment on the great Day. 7In a similar way, Sodom and Gomorrah and the surrounding towns gave themselves up to sexual immorality and perversion. They serve as an example of those who suffer the punishment of eternal fire.

Even the Jewish translators of the Septuagint, translated the Genesis 6 phrase as “angels of God,” revealing their belief that the sons of God are fallen angels.

Why Are Giants Around After the Flood?

If the offspring of the fallen angels were killed in the flood how were there still giants after the flood?


Numbers 13:30-33
30Then Caleb silenced the people before Moses and said, “We should go up and take possession of the land, for we can certainly do it.”
31But the men who had gone up with him said, “We can’t attack those people; they are stronger than we are.” 32And they spread among the Israelites a bad report about the land they had explored. They said, “The land we explored devours those living in it. All the people we saw there are of great size. 33We saw the Nephilim there (the descendants of Anak come from the Nephilim). We seemed like grasshoppers in our own eyes, and we looked the same to them.”

Nephilim on the Ark

The wives of Noah’s sons had Nephilim DNA


God created Adam as the first human son of God.  Adam sinned when the serpent deceived Eve in the Garden of Eden, and therefore was cast out of the garden.  Life for humans was then set in a new environment.


Next we see the “sons of God” coming and mating with human women causing God to destroy the earth with a flood.   All humanity was destroyed except for Noah and his family.


God chose Abraham and eventually  Israel, to be the new “sons of God”.   We saw last week that the Jews repeatedly fell by turning to worship the gods of the other nations.


God then sent His one begotten “son of God” to take on the sin of all mankind and thus restore us to a Edenic state.  We are now able to be the “sons of God” again.

Who Were the Nephilim?


The Nephilim and Rephaim
http://firstlegend.info/nephilimandraphaim.html


The Unseen Realm by Dr. Michael Heiser
Posted by Unchained Disciples at 4:38 PM