It Was An Angel: It Wasn't God 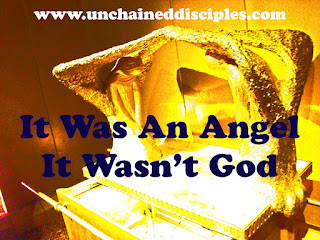 In this study we look at how angels can act on behalf of God and often to the activites attributed to God.  We also discover that angels gave Moses the Jewish law and not God directly.


Gen 18:20-22
20 Then the Lord said, “The outcry against Sodom and Gomorrah is so great and their sin so grievous 21 that I will go down and see if what they have done is as bad as the outcry that has reached me. If not, I will know.”
22 The men turned away and went toward Sodom, but Abraham remained standing before the Lord.


Genesis 19:1
The two angels arrived at Sodom in the evening, and Lot was sitting in the gateway of the city. When he saw them, he got up to meet them and bowed down with his face to the ground.

Gen 19:12-14
12 The two men said to Lot, “Do you have anyone else here—sons-in-law, sons or daughters, or anyone else in the city who belongs to you? Get them out of here, 13 because we are going to destroy this place. The outcry to the Lord against its people is so great that he has sent us to destroy it.”
14 So Lot went out and spoke to his sons-in-law, who were pledged to marry[a] his daughters. He said, “Hurry and get out of this place, because the Lord is about to destroy the city!” But his sons-in-law thought he was joking.


Gen 19:23-25
23 By the time Lot reached Zoar, the sun had risen over the land. 24 Then the Lord rained down burning sulfur on Sodom and Gomorrah—from the Lord out of the heavens. 25 Thus he overthrew those cities and the entire plain, destroying all those living in the cities—and also the vegetation in the land. 26 But Lot’s wife looked back, and she became a pillar of salt.


Angels implement the will of God.  Angels are the hands of God.  When God wants something done on earth involving humans it’s usually done through angels.  Saying God does something or saying that the angels do it is sometimes used synonymously.  When it says God does something related to human affairs it may actually be the angels who do the actual footwork.
If something is done “in the name of God” it means that it is being done out of a request/command from God.  It means that it is aligned with the expressed will of God.

The concept of agency is simply that an agent or representative speaks and acts on full behalf of the one who sent him. This is commonly practiced in modern times in what is known as power of attorney. According to the Jewish understanding of agency, the agent was regarded as the person himself. This is well expressed in The Encyclopedia of the Jewish Religion:


Agent (Heb. Shaliah): The main point of the Jewish law of agency is expressed in the dictum, “a person’s agent is regarded as the person himself” (Ned. 72b; Kidd. 41b). Therefore any act committed by a duly appointed agent is regarded as having been committed by the principal, who therefore bears full responsibility for it with consequent complete absence of liability on the part of the agent. [2]

The Law Was Given By Angels

The Law of Moses


The “Law of Moses” is the same as “The Law of the Lord”.  Moses was the mediator who gave the law from God to the Hebrews.  We see that even though God gave the law through Moses, it’s still considered as being directly from God because Moses got it from God.  Note that “the Law of Moses” is not just the 10 commandments, but the three hundred some odd laws that the Jews had to follow.


The Hebrews got the laws from Moses.


How did God give the law to Moses?

Angels Gave the Law to Moses

Acts 7:37-38
37“This is the Moses who told the Israelites, ‘God will raise up for you a prophet like me from your own people.’h 38He was in the assembly in the wilderness, with the angel who spoke to him on Mount Sinai, and with our ancestors; and he received living words to pass on to us.


Acts 7:52-53
52 Was there ever a prophet your ancestors did not persecute? They even killed those who predicted the coming of the Righteous One. And now you have betrayed and murdered him— 53 you who have received the law that was given through angels but have not obeyed it.”
^^


Gal 3:19-21
19 Why the Law then? It was added [ac]because of transgressions, having been ordained through angels by the [ad]agency of a mediator, until the seed would come to whom the promise had been made. 20 Now a mediator is not [ae]for one party only; whereas God is only one. 21 Is the Law then contrary to the promises of God? May it never be! For if a law had been given which was able to impart life, then righteousness [af]would indeed have been [ag]based on law.


Hebrews 2:2-3
For this reason we must pay much closer attention to [a]what we have heard, so that we do not drift away from it. 2 For if the word spoken through angels proved [b]unalterable, and every transgression and disobedience received a just [c]penalty, 3 how will we escape if we neglect so great a salvation? [d]After it was at the first spoken through the Lord, it was confirmed to us by those who heard


We now see that Moses wasn’t the only mediator.   God also used an angel as His agent to give the law to Moses.  This shouldn’t surprise us since God told Moses that no man can see the face of God and live.

The Jews have long recognized this fact. Jewish authorities record in their Mishnah of the third century that “a man’s agent is as himself” (Berekoth 6:6). And this same principle of interpretation applied to matters dealing with God.


Though the Bible shows God has done many things in past history in a personal way (and without a mediator as an assistant), at other times He used intermediaries to accomplish His will. With many of the prophets of Israel, such as Isaiah, Jeremiah, Ezekiel and others, it was common for them to write in the first person (as though God himself were speaking) while in actual fact it was the prophets themselves who stated or wrote the prophetic teachings in God’s name. The apostle Paul did the same thing when he gave commandments in the name of the Lord (2 Thessalonians 3:6).
-- Association for Scriptural Knowledge

We have seen a similar concept in our study of “the name of Jesus”.  We saw that the disciples were given the authority to heal the sick and cast out demons “in the name of Jesus”.  We discussed that that meant that they were acting with the full authority of Jesus.  In the same manner, angels can act in the authority of God.   This is what is meant when scripture says that some angels have “God’s name in them”.  This is also seen literally because “El” is a name of God, and both angels who are mentioned by name of “El” in their name - Michael (who is like God), and Gabriel (man of God).   Catholic and Ethiopian bibles name Raphael and Uriel as angels - both having “El” in their names as well.


God can use angels to give you revelation like He did with Moses and the law.  We discussed in the last lesson that one of the roles of angels was to give revelation or prophesy.  Where we looked at Revelations 1:1 where it says that Jesus revealed the book of Revelations to John through an angel.


Food for thought:
If angels are used to give revelation and prophecy does that mean that angels are involved when people operate in the gifts of revelation and the gift of prophecy?    If so then would this be true for all of the spiritual gifts?


God Can Use Whomever He Chooses

2 Samuel 24
1Again the anger of the Lord burned against Israel, and he incited David against them, saying, “Go and take a census of Israel and Judah.”
2So the king said to Joab and the army commandersa with him, “Go throughout the tribes of Israel from Dan to Beersheba and enroll the fighting men, so that I may know how many there are.”

1 Chron 21:1
21 Satan rose up against Israel and incited David to take a census of Israel. 2 So David said to Joab and the commanders of the troops, “Go and count the Israelites from Beersheba to Dan. Then report back to me so that I may know how many there are.”
Summary


Posted by Unchained Disciples at 11:56 AM