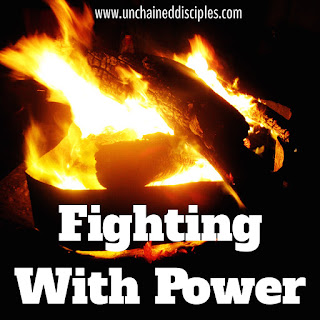 In this bible study, we look at different tactics used in spiritual warfare.  We examine what tools enemy uses to get us to fall into sin.

2 Cor 10:3-4
3 For though we live in the world, we do not wage war as the world does. 4 The weapons we fight with are not the weapons of the world. On the contrary, they have divine power to demolish strongholds. 5 We demolish arguments and every pretension that sets itself up against the knowledge of God, and we take captive every thought to make it obedient to Christ.

So our war is against:

So where does this war take place?

What is a stronghold?

Stronghold: military constructions or buildings designed for the defense of territories in warfare, and also used to solidify rule in a region during peacetime.

oxýrōma (from the root oxyroō, "fortify") – a fortified, military stronghold; a strong-walled fortress, used only in 2 Cor 10:4. Here 3794/oxýrōma ("a heavily-fortified containment") is used figuratively of a false argument in which a person seeks "shelter" ("a safe place") to escape reality.

So notice that the war is against:

The war is against our own minds, our flesh and the things that influence our thoughts

Garden of Eden
The resulting reasoning process of the Eve included three elements, “that the tree produced fruit that was good for food, was attractive to the eye, and was desirable for making one wise”

This is what caused the sin


Thought Patterns of Our Culture


Romans 12:22 Do not conform to the pattern of this world, but be transformed by the renewing of your mind. Then you will be able to test and approve what God's will is—his good, pleasing and perfect will.We need to reject the thought patterns of the world and accept the thought patterns of God.  We need to reject the values of the world they conflict with God's values.

Christianity/Religion is not from God - it's man made


The bible is Old and Not Relevant

The bible was written so long ago that everything back then is no longer relevant.
If we accept that thought pattern then we accept the lies that:


Everybody is entitled to their own belief


If you accept this philosophy then you can justify:

God wants to have a relationship with all of His creation, but that doesn’t mean you can go to Heaven

they're happy and it's their lives and nobody else is hurt by it.

Strongholds in the Church

It's Helpful To Discuss Other People's Sin

The test
What is the purpose of you bringing it up?

Talk to them about it privately before talking to others

All Bad Things That Happen Are God’s Judgment


based on: "whatever happens was God's plan"
- this blames God for every bad and evil that happens

Especially during crisis in our life or a huge loss.

We tend to blame God when something goes wrong because we believe He's all powerful.  But when we are in the midst of the trial we don't believe that He is all powerful and we think that it's up to us.  Or either we think He is all powerful but "He just doesn't really love me".  I'm not really good enough to deserve His attention.

Why this is wrong

Why did Jesus pray?
- If everything is going to happen as He planned He wouldn't need to pray.

example:
God knew it would happen


Focusing on Our Bad Circumstances

Mark 8:15-21
14The disciples had forgotten to bring bread, except for one loaf they had with them in the boat. 15"Be careful," Jesus warned them. "Watch out for the yeast of the Pharisees and that of Herod."
16They discussed this with one another and said, "It is because we have no bread."
17 Aware of their discussion, Jesus asked them: "Why are you talking about having no bread? Do you still not see or understand? Are your hearts hardened? 18 Do you have eyes but fail to see, and ears but fail to hear? And don’t you remember? 19 When I broke the five loaves for the five thousand, how many basketfuls of pieces did you pick up?"
"Twelve," they replied.
20"And when I broke the seven loaves for the four thousand, how many basketfuls of pieces did you pick up?"
They answered, "Seven."
21He said to them, "Do you still not understand?"
When the enemy causes bad circumstances around your life he’s hoping that you’ll focus on those circumstances


When we get broken and disappointed the enemy knows how to come in and what lies to whisper and plant in our hearts.  The lies can be about ourselves, other people or God.  We want to blame God or blame ourselves.

These will separate you from God

Satan knows what you want, so he’ll send you a counterfeit

Sometimes your “blessing” may not be from God.  Did it draw you closer to God or further from Him


Prioritizing Things of the World


Matthew 16:21-23
From that time on Jesus began to explain to his disciples that he must go to Jerusalem and suffer many things at the hands of the elders, the chief priests and the teachers of the law, and that he must be killed and on the third day be raised to life.
22 Peter took him aside and began to rebuke him. “Never, Lord!” he said. “This shall never happen to you!”
23 Jesus turned and said to Peter, “Get behind me, Satan! You are a stumbling block to me; you do not have in mind the concerns of God, but merely human concerns.”

- you are figuratively worshipping Satan over God

It’s a desire that fulfills a physical need.

It’s a problem whenever you’re out of control.

I think you don’t want to marry anyone who’s out of control in any area of their life if they’re not working on it:


Lust of the Eyes


The devil will always call your attention repeatedly to the thing that is harmful for you, but he will do it in a way that makes you feel deprived if you don't indulge in eating, drinking, or partaking of what is harmful. The implication of the devil is always: "This is so good. Has God really said you can't have any of this good thing?"

Jesus' second trial, the devil offers Jesus all the kingdoms of the world if he will worship him


Acts 10: 37-38
37 You know what has happened throughout the province of Judea, beginning in Galilee after the baptism that John preached— 38 how God anointed Jesus of Nazareth with the Holy Spirit and power, and how he went around doing good and healing all who were under the power of the devil, because God was with him.

Why can people heal?

2 Timothy 1:7*
For God has not given us a spirit of fear, but of power and love and discipline.

This verse points out a lot

So then where is this spirit from?

God only allows us to fight enemies that we've been equipped to fight.
The enemy tries to distract you and give you fear and anxiety to make your forget about the tools you've been equipped with.

satan wants us to focus on him

1 Pet 5:6-10
6 Humble yourselves, therefore, under God’s mighty hand, that he may lift you up in due time. 7 Cast all your anxiety on him because he cares for you.
8 Be alert and of sober mind. Your enemy the devil prowls around like a roaring lion looking for someone to devour. 9 Resist him, standing firm in the faith, because you know that the family of believers throughout the world is undergoing the same kind of sufferings.
10 And the God of all grace, who called you to his eternal glory in Christ, after you have suffered a little while, will himself restore you and make you strong, firm and steadfast.

- we sin when we surrender to the Devil’s temptation

At the heart of all temptations, is the act of pushing God aside because we perceive him as secondary  in comparison with all the apparently far more urgent matters that fill our lives.

We have to ask ourselves what benefit is it the sin providing?  Is it a cure for

Is it a reaction to something we aren’t healed from?

If you get fed up and are ready to change your ways you can go through the cleansing process including:

This is how we break every chain

This is how we become Unchained

these are the steps in the Sharpening Your Sword

1 John 1:8-10
8If we claim to be without sin, we deceive ourselves and the truth is not in us. 9If we confess our sins, he is faithful and just and will forgive us our sins and purify us from all unrighteousness. 10If we claim we have not sinned, we make him out to be a liar and his word is not in us.

What you don't want is to tell yourself that it's not a sin
Posted by Unchained Disciples at 3:03 AM

Email ThisBlogThis!Share to TwitterShare to FacebookShare to Pinterest
Labels: dealing with disappointment, deliverance, lust of the eyes, lust of the flesh, pride of life, sharpening your sword, spiritual warfare, strongholds, tactics of satan