Power In the Name of Jesus 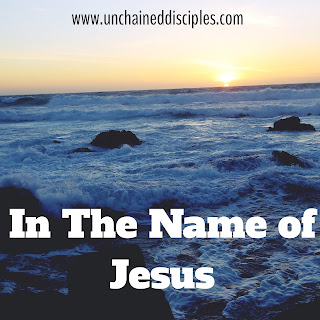 What year is this?    2015 years since what?
His coming has change the calendars

look at the power we have “in the name of Jesus”

What Does “In the Name of Jesus Mean”?


What does “in the name of Jesus mean”?

Acts 4:7-12
7 They had Peter and John brought before them and began to question them: “By what power or what name did you do this?”
8 Then Peter, filled with the Holy Spirit, said to them: “Rulers and elders of the people! 9 If we are being called to account today for an act of kindness shown to a man who was lame and are being asked how he was healed, 10 then know this, you and all the people of Israel: It is by the name of Jesus Christ of Nazareth, whom you crucified but whom God raised from the dead, that this man stands before you healed. 11 Jesus is
“‘the stone you builders rejected,
which has become the cornerstone.’
12 Salvation is found in no one else, for there is no other name under heaven given to mankind by which we must be saved.”


“In the name of” means to act by proxy, on the authority of something or someone greater than yourself.

The person reading the scroll was stating that they whatever they said had the full authority of the king because they were speaking as his representative.

The police officer is saying that he's not just commanding you to stop as a man in a suit but with the full authority of the legal system behind him.

“In the name of” Jesus means:


The policeman is saying that because he is standing in the place of the law and speaking on behalf of it. To the degree that he speaks for the law, then he can enforce the law and he has authority. When he steps outside of the law, he has lost his authority even though he still says, "Stop in the name of the law."


Philippians 2:9-11
9Therefore God exalted him to the highest place and gave him the name that is above every name, 10that at the name of Jesus every knee should bow, in heaven and on earth and under the earth, 11and every tongue acknowledge that Jesus Christ is Lord,
to the glory of God the Father.

The name of Jesus is the highest authority that exists.   Every knee shall bow to him means that pastors, kings, celebrities, and even Satan must bow before the name of Jesus.   Jesus’ authority is above any other authority in heaven and on earth.

Salvation Is Through the Name of Jesus


1 John 2:12
12 I am writing to you, dear children,
because your sins have been forgiven on account of his name.

We are saved through the actions of Jesus, and not because of our own righteousness.  We are saved by the saving grace of Jesus not by our own power.

There is no other name by which we can obtain salvation:


Praying In the Name


John 16:23-24
23 In that day you will no longer ask me anything. Very truly I tell you, my Father will give you whatever you ask in my name. 24 Until now you have not asked for anything in my name. Ask and you will receive, and your joy will be complete.

John 14:6
Jesus answered, "I am the way and the truth and the life. No one comes to the Father except through me.

If we truly want to get into the presence of God we need to approach Him as a representative of His son Jesus.


Miracles in the Name of Jesus


When the apostles performed miracles, it was in the name of Jesus.


Mark 16:15-18
15 He said to them, “Go into all the world and preach the gospel to all creation. 16 Whoever believes and is baptized will be saved, but whoever does not believe will be condemned. 17 And these signs will accompany those who believe: In my name they will drive out demons; they will speak in new tongues; 18 they will pick up snakes with their hands; and when they drink deadly poison, it will not hurt them at all; they will place their hands on sick people, and they will get well.”


Acts 9:32-34
32 As Peter traveled about the country, he went to visit the Lord’s people who lived in Lydda. 33 There he found a man named Aeneas, who was paralyzed and had been bedridden for eight years. 34 “Aeneas,” Peter said to him, “Jesus Christ heals you. Get up and roll up your mat.” Immediately Aeneas got up. 35 All those who lived in Lydda and Sharon saw him and turned to the Lord.

Acts 3:1-8,16
3 One day Peter and John were going up to the temple at the time of prayer—at three in the afternoon. 2 Now a man who was lame from birth was being carried to the temple gate called Beautiful, where he was put every day to beg from those going into the temple courts. 3 When he saw Peter and John about to enter, he asked them for money. 4 Peter looked straight at him, as did John. Then Peter said, "Look at us!" 5 So the man gave them his attention, expecting to get something from them.
6 Then Peter said, "Silver or gold I do not have, but what I do have I give you. In the name of Jesus Christ of Nazareth, walk." 7 Taking him by the right hand, he helped him up, and instantly the man’s feet and ankles became strong. 8 He jumped to his feet and began to walk. Then he went with them into the temple courts, walking and jumping, and praising God.
...
16 By faith in the name of Jesus, this man whom you see and know was made strong. It is Jesus’ name and the faith that comes through him that has completely healed him, as you can all see.


Acts 16:16 - 18
16 Once when we were going to the place of prayer, we were met by a female slave who had a spirit by which she predicted the future. She earned a great deal of money for her owners by fortune-telling. 17 She followed Paul and the rest of us, shouting, "These men are servants of the Most High God, who are telling you the way to be saved." 18 She kept this up for many days. Finally Paul became so annoyed that he turned around and said to the spirit, "In the name of Jesus Christ I command you to come out of her!" At that moment the spirit left her.


Luke 10:17-20
17 When the seventy-two disciples returned, they joyfully reported to him, "Lord, even the demons obey us when we use your name!" 18 "Yes," he told them, "I saw Satan falling from heaven as a flash of lightning! 19 And I have given you authority over all the power of the enemy, and you can walk among snakes and scorpions and crush them. Nothing will injure you. 20 But don't rejoice just because evil spirits obey you; rejoice because your names are registered as citizens of heaven."

How to Access the Power of the Name of Jesus?


Acts 19:13-17
Then certain of the vagabond Jews, exorcists, took upon them to call over them which had evil spirits the name of the Lord Jesus, saying, We adjure you by Jesus whom Paul preacheth. And there were seven sons of one Sceva, a Jew, and chief of the priests, which did so. And the evil spirit answered and said, Jesus I know, and Paul I know; but who are ye? And the man in whom the evil spirit was leaped on them, and overcame them, and prevailed against them, so that they fled out of that house naked and wounded. And this was known to all the Jews and Greeks also dwelling at Ephesus; and fear fell on them all, and the name of the Lord Jesus was magnified


Mark 9:38-41
38 "Teacher," said John, "we saw someone driving out demons in your name and we told him to stop, because he was not one of us."
39 "Do not stop him," Jesus said. "For no one who does a miracle in my name can in the next moment say anything bad about me, 40 for whoever is not against us is for us.


What else was different between the two accounts?

13 I write these things to you who believe in the name of the Son of God so that you may know that you have eternal life. 14 This is the confidence we have in approaching God: that if we ask anything according to his will, he hears us. 15 And if we know that he hears us—whatever we ask—we know that we have what we asked of him.

1 Corinthians 14:12
12 Even so you, since you are zealous for spiritual gifts, let it be for the edification of the church that you seek to excel.

The gift of healing needs to be done for the purpose of improving and growing the church.  It could be to enhance the faith of the healed person or those who witnessed the healing.  It can be to convert non-believers.


Acts 3:16
16By faith in the name of Jesus, this man whom you see and know was made strong. It is Jesus’ name and the faith that comes through him that has completely healed him, as you can all see.

God chose who would be healed based on how it would help edify the church.

Mark 6: 1-6
1Jesus left there and went to his hometown, accompanied by his disciples. 2When the Sabbath came, he began to teach in the synagogue, and many who heard him were amazed.
“Where did this man get these things?” they asked. “What’s this wisdom that has been given him? What are these remarkable miracles he is performing? 3Isn’t this the carpenter? Isn’t this Mary’s son and the brother of James, Joseph,a Judas and Simon? Aren’t his sisters here with us?” And they took offense at him.
4Jesus said to them, “A prophet is not without honor except in his own town, among his relatives and in his own home.” 5He could not do any miracles there, except lay his hands on a few sick people and heal them. 6He was amazed at their lack of faith.

So the 3 necessities needed to act in the name of Jesus are:


Ephesians 1:19-2019 I also pray that you will understand the incredible greatness of God’s power for us who believe him. This is the same mighty power 20 that raised Christ from the dead and seated him in the place of honor at God’s right hand in the heavenly realms.

You can have a million dollars in the bank and starve


Posted by Unchained Disciples at 12:54 AM