The Anointing of the Holy Spirit 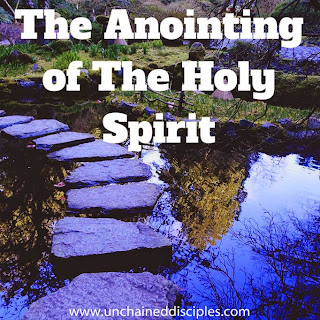 
Review of “Does Everyone Have Spiritual Gifts”

3 levels of teaching on Spirituality

The Anointing of the Holy Spirit


Two weeks ago we looked at what the Spiritual Gifts are, last week we looked at who gets spiritual gifts and why, and this week we discuss how to get Holy Spirit within you.


What is anointing of the Holy Spirit?

Is that the same as being filled by the Holy Spirit?

Anointing is done when you get a new role, assignment or duty.  It is a one time event.   In the Old Testament, priests, kings, judges and prophets were anointed prior to taking office.
Being filled by the Holy Spirit can happen whenever God wants or needs it to happen or it can be ushered in by us.  In the bible things that happened when people were filled with the Holy Spirit include: speaking in tongues, having boldness in evangelism, prophesying, or being filled with joy, thankfulness or submission, or giving musical praise.  This can happen many times within a Christian’s life.

Kings
1 Samuel 10:1-10
10 Then Samuel took a flask of olive oil and poured it on Saul’s head and kissed him, saying, “Has not the Lord anointed you ruler over his inheritance?[a] 2 When you leave me today, you will meet two men near Rachel’s tomb, at Zelzah on the border of Benjamin. They will say to you, ‘The donkeys you set out to look for have been found. And now your father has stopped thinking about them and is worried about you. He is asking, “What shall I do about my son?”’
3 “Then you will go on from there until you reach the great tree of Tabor. Three men going up to worship God at Bethel will meet you there. One will be carrying three young goats, another three loaves of bread, and another a skin of wine. 4 They will greet you and offer you two loaves of bread, which you will accept from them.
5 “After that you will go to Gibeah of God, where there is a Philistine outpost. As you approach the town, you will meet a procession of prophets coming down from the high place with lyres, timbrels, pipes and harps being played before them, and they will be prophesying. 6 The Spirit of the Lord will come powerfully upon you, and you will prophesy with them; and you will be changed into a different person. 7 Once these signs are fulfilled, do whatever your hand finds to do, for God is with you.
8 “Go down ahead of me to Gilgal. I will surely come down to you to sacrifice burnt offerings and fellowship offerings, but you must wait seven days until I come to you and tell you what you are to do.”
9 As Saul turned to leave Samuel, God changed Saul’s heart, and all these signs were fulfilled that day. 10 When he and his servant arrived at Gibeah, a procession of prophets met him; the Spirit of God came powerfully upon him, and he joined in their prophesying.
I Samuel 16:13
13 So Samuel took the horn of oil and anointed him in the presence of his brothers, and from that day on the Spirit of the Lord came powerfully upon David.

Notice that even though David and Saul had the same anointing their outcomes were vastly different.  Even though you are anointed your character and will can still determine how well you act in your anointing.

Prophet
I Kings 19:16
15 The Lord said to him, “Go back the way you came, and go to the Desert of Damascus. When you get there, anoint Hazael king over Aram. 16 Also, anoint Jehu son of Nimshi king over Israel, and anoint Elisha son of Shaphat from Abel Meholah to succeed you as prophet.


Judge
Judges 3:7-11
7 The Israelites did evil in the eyes of the Lord; they forgot the Lord their God and served the Baals and the Asherahs. 8 The anger of the Lord burned against Israel so that he sold them into the hands of Cushan-Rishathaim king of Aram Naharaim,[a] to whom the Israelites were subject for eight years. 9 But when they cried out to the Lord, he raised up for them a deliverer, Othniel son of Kenaz, Caleb’s younger brother, who saved them. 10 The Spirit of the Lord came on him, so that he became Israel’s judge[b] and went to war. The Lord gave Cushan-Rishathaim king of Aram into the hands of Othniel, who overpowered him. 11 So the land had peace for forty years, until Othniel son of Kenaz died.

Have you recently been chosen for a new responsibility? Begin this responsibility by finding a quiet place and having a little private ordination service between you and God. Ask God to lay His hands upon you and to anoint you for the task ahead. This anointing can include or oil, but it’s not a necessity.  Then day by day, beg for His power, plead for His fulness and walk in the Spirit.


Isaiah 61:1-3
The Spirit of the Sovereign Lord is on me,
because the Lord has anointed me
to proclaim good news to the poor.
He has sent me to bind up the brokenhearted,
to proclaim freedom for the captives
and release from darkness for the prisoners,[a]
2 to proclaim the year of the Lord’s favor
and the day of vengeance of our God,
to comfort all who mourn,
3     and provide for those who grieve in Zion—
to bestow on them a crown of beauty
instead of ashes,
the oil of joy
instead of mourning,
and a garment of praise
instead of a spirit of despair.


What does the word “Christ” mean?

Christ means the anointed one

Luke 4:16-22
16 He went to Nazareth, where he had been brought up, and on the Sabbath day he went into the synagogue, as was his custom. He stood up to read, 17 and the scroll of the prophet Isaiah was handed to him. Unrolling it, he found the place where it is written:
18 “The Spirit of the Lord is on me,
because he has anointed me
to proclaim good news to the poor.
He has sent me to proclaim freedom for the prisoners
and recovery of sight for the blind,
to set the oppressed free,
19     to proclaim the year of the Lord’s favor.”[f]
20 Then he rolled up the scroll, gave it back to the attendant and sat down. The eyes of everyone in the synagogue were fastened on him. 21 He began by saying to them, “Today this scripture is fulfilled in your hearing.”


Acts 10:34-38
34 Then Peter began to speak: “I now realize how true it is that God does not show favoritism 35 but accepts from every nation the one who fears him and does what is right. 36 You know the message God sent to the people of Israel, announcing the good news of peace through Jesus Christ, who is Lord of all. 37 You know what has happened throughout the province of Judea, beginning in Galilee after the baptism that John preached— 38 how God anointed Jesus of Nazareth with the Holy Spirit and power, and how he went around doing good and healing all who were under the power of the devil, because God was with him.


One of the new responsibilities that we need to be equipped for today is the decision to become a Christian.  Upon becoming a Christian you become anointed or indwelt by the Holy Spirit.  Once filled with the Holy Spirit, we receive a different level of conviction for our sins, a more direct means to access God, and some receive Spiritual Gifts.

"The anointing on your life is what positions you to be victorious in character."
-- Bill Johnson

Acts 8:14-17
Now when the apostles who were at Jerusalem heard that Samaria had received the word of God, they sent Peter and John to them, 15 who, when they had come down, prayed for them that they might receive the Holy Spirit. 16 For as yet He had fallen upon none of them. They had only been baptized in the name of the Lord Jesus. 17 Then they laid hands on them, and they received the Holy Spirit.

The Disciples Get Anointed by the Holy Spirit
John 20
19 On the evening of that first day of the week, when the disciples were together, with the doors locked for fear of the Jewish leaders, Jesus came and stood among them and said, “Peace be with you!” 20 After he said this, he showed them his hands and side. The disciples were overjoyed when they saw the Lord.
21 Again Jesus said, “Peace be with you! As the Father has sent me, I am sending you.” 22 And with that he breathed on them and said, “Receive the Holy Spirit.

Posted by Unchained Disciples at 12:50 AM