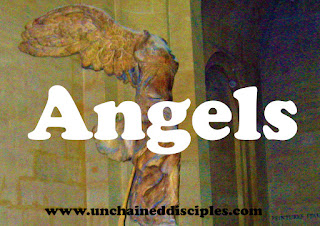 In this study, we discuss the nature of angels.  Some topics covered include: angels vs demons, can angels have sex, can angels sin, are angels immortal, and are there female angels.


I’ve heard it said regarding angels and testimonies…


Angels
Today we start a series on angels.  We’re going to start with the basics, and progress deeper as the series goes on.


Job 1:13-15
13One day when Job’s sons and daughters were feasting and drinking wine at the oldest brother’s house, 14a messenger came to Job and said, “The oxen were plowing and the donkeys were grazing nearby, 15and the Sabeans attacked and made off with them. They put the servants to the sword, and I am the only one who has escaped to tell you!”

Matthew 11:9-10
9 Then what did you go out to see? A prophet? Yes, I tell you, and more than a prophet. 10 This is the one about whom it is written:
“‘I will send my messenger ahead of you,
who will prepare your way before you.’[c]

Luke 7:24
24 After John’s messengers left, Jesus began to speak to the crowd about John: “What did you go out into the wilderness to see? A reed swayed by the wind?

The Nature of Angels

There is no reason to assume that satan’s angels are any different than Michael’s angels in terms of appearance and power except where specified in the bible.  We will see later that they even have the same hierarchy of command.  There may be differences based on whether or not they are in Heaven.  We do know, though,  that one difference is that Satan and his angels will be defeated and are destined for the fiery pit.

Angels are Not Saints (or Departed Humans)


The word "saint" (hagios) is derived from a Greek verb (hagiazo) whose basic meaning is "to set apart”,  "sanctify, " or "make holy."

The idea of the word “saints” is a group of people set apart for the Lord and His kingdom.

The bible depicts saints and angels as being distinct


Rev 8:4
The smoke of the incense, together with the prayers of God's people [saints], went up before God from the angel's hand.

Why do Catholics refer to angels as saints?: St. Gabriel, St. Michael and Saint Raphael?

The Catholic church has three angels that are referred to as saints...why?

The word "saint"' (which comes from the Latin sanctus, holy) refers, in Catholic tradition, to those who are with God in eternity. The Second Vatican Council teaches, they are joined with God forever in a life free from decay, and share in his life and happiness.  … Thus, there's nothing that would deny applying the title to angels.
-- from article in Catholic Courier June 2011


They Are Created Beings

Colossians 1:15-16
15The Son is the image of the invisible God, the firstborn over all creation. 16For in him all things were created: things in heaven and on earth, visible and invisible, whether thrones or powers or rulers or authorities; all things have been created through him and for him.


When Were They Created?


Gen 2:1-2
Thus the heavens and the earth were completed in all their vast array.
2 By the seventh day God had finished the work he had been doing; so on the seventh day he rested from all his work.


New American Standard Bible
Thus the heavens and the earth were completed, and all their hosts.

King James Bible
Thus the heavens and the earth were finished, and all the host of them.

Hebrews 1:14
Are not all angels ministering spirits sent to serve those who will inherit salvation?

Angels Have the power of moral choice (Free Will)

So we see that not only will we not be judged, but we will help judge.

Are All Angels Male?

There is no doubt that every reference to angels in Scripture is in the masculine gender.  The Hebrew word for angel is masculine.  The Greek word for “angel” in the New Testament, angelos, is in the masculine form. In fact, a feminine form of angelos does not exist. There are three genders in grammar—masculine (he, him, his), feminine (she, her, hers), and neuter (it, its). Angels are never referred to in any gender other than masculine.


Zechariah 5:5-11
5 Then the angel who was speaking to me came forward and said to me, “Look up and see what is appearing.”
6 I asked, “What is it?”
He replied, “It is a basket.” And he added, “This is the iniquity[b] of the people throughout the land.”
7 Then the cover of lead was raised, and there in the basket sat a woman! 8 He said, “This is wickedness,” and he pushed her back into the basket and pushed its lead cover down on it.
9 Then I looked up—and there before me were two women, with the wind in their wings! They had wings like those of a stork, and they lifted up the basket between heaven and earth.
10 “Where are they taking the basket?” I asked the angel who was speaking to me.
11 He replied, “To the country of Babylonia[c] to build a house for it. When the house is ready, the basket will be set there in its place.”

Some Jewish traditions do believe that there are both male and female angels.

They Shouldn’t be Worshiped

Col 2:18
18 Do not let anyone who delights in false humility and the worship of angels disqualify you. Such a person also goes into great detail about what they have seen; they are puffed up with idle notions by their unspiritual mind.

Rev 19:9-10
9Then the angel said to me, “Write this: Blessed are those who are invited to the wedding supper of the Lamb!” And he added, “These are the true words of God.”
10At this I fell at his feet to worship him. But he said to me, “Don’t do that! I am a fellow servant with you and with your brothers and sisters who hold to the testimony of Jesus. Worship God! For it is the Spirit of prophecy who bears testimony to Jesus.”

Rev 22:8-9
8I, John, am the one who heard and saw these things. And when I had heard and seen them, I fell down to worship at the feet of the angel who had been showing them to me. 9But he said to me, “Don’t do that! I am a fellow servant with you and with your fellow prophets and with all who keep the words of this scroll. Worship God!”


The Devil Wants To Be Worshiped


Matthew 4:8-10
8Again, the devil took him to a very high mountain and showed him all the kingdoms of the world and their splendor. 9“All this I will give you,” he said, “if you will bow down and worship me.”
10Jesus said to him, “Away from me, Satan! For it is written: ‘Worship the Lord your God, and serve him only.’e ”

If an angel tells you to worship him then it is not from God.

2 Kings 19:35
35That night the angel of the Lord went out and put to death a hundred and eighty-five thousand in the Assyrian camp. When the people got up the next morning—there were all the dead bodies!

Can Angels Marry or Reproduce?

Matthew 22:30
30At the resurrection people will neither marry nor be given in marriage; they will be like the angels in heaven.

Gen 6:1-4
1When human beings began to increase in number on the earth and daughters were born to them, 2the sons of God saw that the daughters of humans were beautiful, and they married any of them they chose. 3Then the Lord said, “My Spirit will not contend witha humans forever, for they are mortalb ; their days will be a hundred and twenty years.”
4The Nephilim were on the earth in those days—and also afterward—when the sons of God went to the daughters of humans and had children by them. They were the heroes of old, men of renown.


Job 1:6-7
6One day the angelsa came to present themselves before the Lord, and Satanb also came with them. 7The Lord said to Satan, “Where have you come from?”
Satan answered the Lord, “From roaming throughout the earth, going back and forth on it.”


Luke 20:34-36
34 Jesus replied, “The people of this age marry and are given in marriage. 35 But those who are considered worthy of taking part in the age to come and in the resurrection from the dead will neither marry nor be given in marriage, 36 and they can no longer die; for they are like the angels.


Psalms 82:5-7
5 “The ‘gods’ know nothing, they understand nothing.
They walk about in darkness;
all the foundations of the earth are shaken.
6 “I said, ‘You are “gods”;
you are all sons of the Most High.’
7 But you will die like mere mortals;
you will fall like every other ruler.”


The word  immortal comes from a Latin word that means “does not die”.  It doesn’t mean cannot die.  Perhaps if you are in Heaven you will not die, but if you are thrown out of Heaven you can.

Discussion:  Do angels have wings?  Are they chubby babies?


Gen 18:1-2
1The Lord appeared to Abraham near the great trees of Mamre while he was sitting at the entrance to his tent in the heat of the day. 2Abraham looked up and saw three men standing nearby. When he saw them, he hurried from the entrance of his tent to meet them and bowed low to the ground.

Genesis 18:8
8He then brought some curds and milk and the calf that had been prepared, and set these before them. While they ate, he stood near them under a tree.

Genesis 19:1-3
The two angels arrived at Sodom in the evening, and Lot was sitting in the gateway of the city. When he saw them, he got up to meet them and bowed down with his face to the ground.

Hebrews 13:1-2
1Keep on loving one another as brothers and sisters. 2Do not forget to show hospitality to strangers, for by so doing some people have shown hospitality to angels without knowing it.

Since angels were often mistaken as men in the bible we know that they must have looked like men.  The two options are:

There is mention of Cherubim and Seraphim with wings.  Whether or not these are considered angels would determine if this would mean some angels have wings.


We know that in the spirit realm there exists: God, Jesus, Satan, demons, and angels.   We often assume that whenever the bible mentions a living being in Heaven that it’s either Jesus or an angel.  Why can’t there be other living beings.  Why do cherubim and seraphim have to be angels?  Why is everything else an angel?

In the study after next we’ll look at what types of heavenly beings exist.

Posted by Unchained Disciples at 4:51 PM